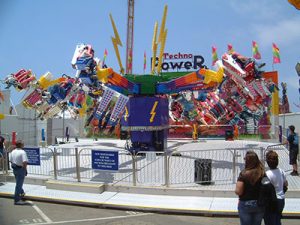 E.K. Fernandez Shows will bring special attractions and new rides to the Maui County Carnival scheduled for Thursday, April 28, though Sunday, May 1, 2016, at the War Memorial Complex in Wailuku.

For the first time, Techno Power and Safari Train will be added to the midway, and carnival goers will be able to cheer for their favorites during pig races and enjoy three circus acts.

Techno Power passengers are securely fastened with over-the-shoulder restraints into one of its 18 two-passenger, floorless vehicles. As the ride rotates, the arms lift off the ground. The Techno Power coming to the Maui County Carnival is one of only two in the United States. 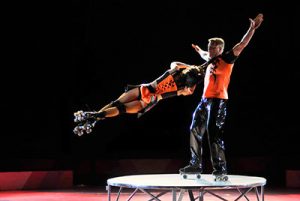 Ana DeSouza and Karoly Zeman perform a roller skating act that combines strength and beauty. DeSouza grew up traveling and performing throughout Europe with her internationally-known flying trapeze family, the Flying Souzas. While performing at a circus in Ireland, she met Karoly Zeman, a member of a circus family and a graduate of the Hungarian Circus School. It was love at first sight, and four months later, they were married and began performing their exciting roller skating act. They have recently finished performing at Circus Circus in Las Vegas and will join the Big Apple Circus in New York in September.

The Anastasini Circus Show led by Ringmaster Giovanni Anastasini features three circus acts that have appeared at the 50th State Fair on O‘ahu and the Big Island Fair in Kona. Now, for the first time, the families of Maui will be  entertained by these exciting performers.

Giovanni, originally from Italy, is an eighth-generation member of the famous family of circus performers. He includes audience participation in his comedy diabolo act. 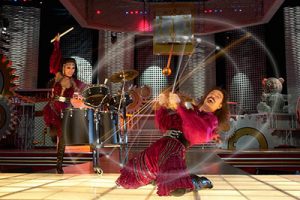 The award-winning duo, Sergio and Martha Martinez from Las Vegas, use boleadoras, fire, whips and riveting percussion. Bursting with raw energy, they merge the element of danger, represented by boleadoras, a perilous spinning weapon stemming back to prehistoric origins, with the passionate malabo, a captivating form of Argentinean footwork inspired by flamenco and Irish step-dancing.

To this stunning array, they integrate impossibly intricate drumming, dazzling costumes along with spirited wit and humor while delivering each show-stopping performance with unequaled charisma. 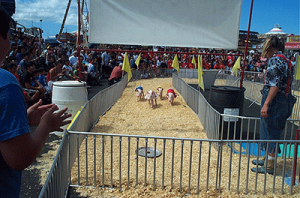 Hedrick’s thoroughbred racing pigs from Kansas charge out of the starting gates in their colorful racing silks generating thrill-a-minute excitement as they dash to the finish line for the ultimate trophy —an Oreo Cookie!

Another first will be the Fun Pass card system. The cards replace admission tickets and ride coupons, and they can be reloaded with additional credits at kiosk stations on the carnival grounds.

Cards are $20 each and are loaded with 190 credits to be used for admission, rides and food at the Fernandez food wagons. 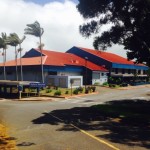 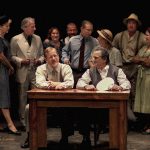