*Video credit: PacIOOS. Carl Meyer, Ph.D. and others of the University of Hawaiʻi at Mānoa tag a tiger shark off the coast of Maui near Kīhei in October 2013.

Findings of a nearly two-year long tagging and tracking study of tiger sharks off Maui and Oʻahu will be unveiled during a press conference later this week (the findings are now available at this LINK), with new information to be released on shark behavior around the Valley Isle.  The study was commissioned after a spike in the number of shark bite incidents on Maui in 2012 and 2013, which tapered off somewhat in 2014.  (Scroll down to see full listing of Maui shark bite reports from 2013 to 2016).

The research was led by a team from the University of Hawaiʻi’s Institute of Marine Biology and was commissioned by the Hawaiʻi Department of Land and Natural Resources.

DLNR launched the $186,000, two-year study in 2013 to focus on tiger shark movements around Maui, and compared their behavior to that of known movement patterns around the other main Hawaiian islands.

University officials say the sharks were captured and fitted with the tracking devices off of Kīhei, Olowalu and Kahului, Maui beginning in 2013 as part of the ongoing study; and that similar efforts were launched off of Oʻahu in October to provide a comparative assessment.

Additional support and funding was provided by the Pacific Islands Ocean Observing System or PacIOOS program.

The Maui and Oʻahu tiger shark tracks are available online at the Pacific Islands Ocean Observing System website, which manages the data and provides funding for ongoing research operations.  A total of 28 sharks were being tracked at last report, the largest of which is a 14.7 foot female

The findings will be presented during a news conference on Thursday, May 19, 2016, in Honolulu.  Among those scheduled to participate are: Dr. Carl Meyer, Principal Investigator, Hawaiʻi Institute of Marine Biology; Dr. Bruce Anderson, Administrator, DLNR Division of Aquatic Resources; and Melissa Iwamoto, Director, Pacific Islands Ocean Observing System.

There were a total of eight shark bite encounters reported on the state’s Hawaii Sharks website in Maui waters in 2013: 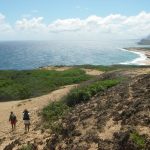 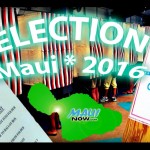