Fishermen Safe After Boat Runs Aground off Lānaʻi

Two fishermen are safe after the boat they were in became stranded on reef offshore of Lānaʻi on Sunday afternoon.

The incident was reported at 1:15 p.m. on Sunday, Jan. 15, in the area often referred to as “White Rock,” about a mile east from where the Keomoku Highway reaches the shoreline on the northeast coast of the island.

At around 1:45 p.m., firefighters found the 19 foot Glasspro motor boat stuck on the reef about 100 yards from shore.

Fire officials say two males were attempting to push the boat back into deeper water but were unable. Firefighters also tried unsuccessfully to free the boat that was grounded in 2 to 3 feet of water.

According to department reports, a fire rescue boat out of Lahaina responded but could not assist because of very shallow water and the risk of the damaged boat sinking once towed to deep water.

The boat with two men aboard, departed from Hawaiʻi Kai on Oʻahu early Sunday on a fishing trip to Lānaʻi. The boat’s owner, a 51-year-old man from Waiʻanae and another man, age 52 and also from Oʻahu, didn’t realize how shallow the water was and drifted onto the reef while addressing seawater rising in the hull, according to Maui Fire Services Chief Edward Taomoto.

The men suffered only minor scrapes from walking on the reef.

When firefighters left the scene, the boat’s hull was still intact and no fuel or oil had leaked. Crews assisted the owner with salvaging valuables from the boat and brought the two men back to Lānaʻi City. 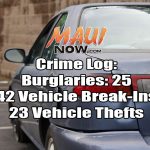 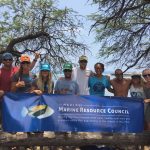