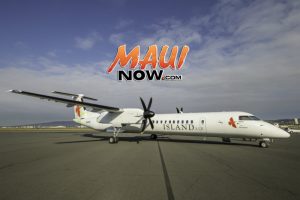 With the addition of new Q400 aircraft to its fleet, Island Air has begun increasing the number of interisland flights to its schedule.

By the beginning of May, Island Air expects to offer up to 476 flights each week between O‘ahu, Maui, Kaua‘i and Hawai‘i Island, compared to the 266 flights per week it currently offers.

“The added flight service is in response to growing demand from our customers and travel partners and also reflects the improved operational efficiencies of the new Q400 aircraft that are being phased into our fleet” said David Uchiyama, president and chief executive officer of Island Air. “The entire Island Air team remains focused on enhancing the interisland travel experience for residents and visitors, which includes providing more convenient options to island hop, either for business or to enjoy a weekend getaway or visit.”

Island Air’s first new Q400 began service on January 12. The aircraft is 30 percent faster than conventional turboprops, resulting in shorter flight times, which enables Island Air to operate more flights each day. The airline plans to add up to seven new Q400s by the end of the year and will transition its existing fleet of five ATR-72 aircraft out of service.