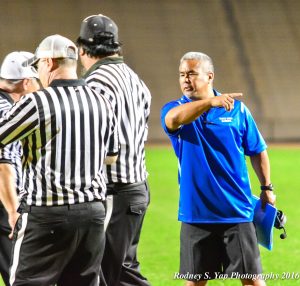 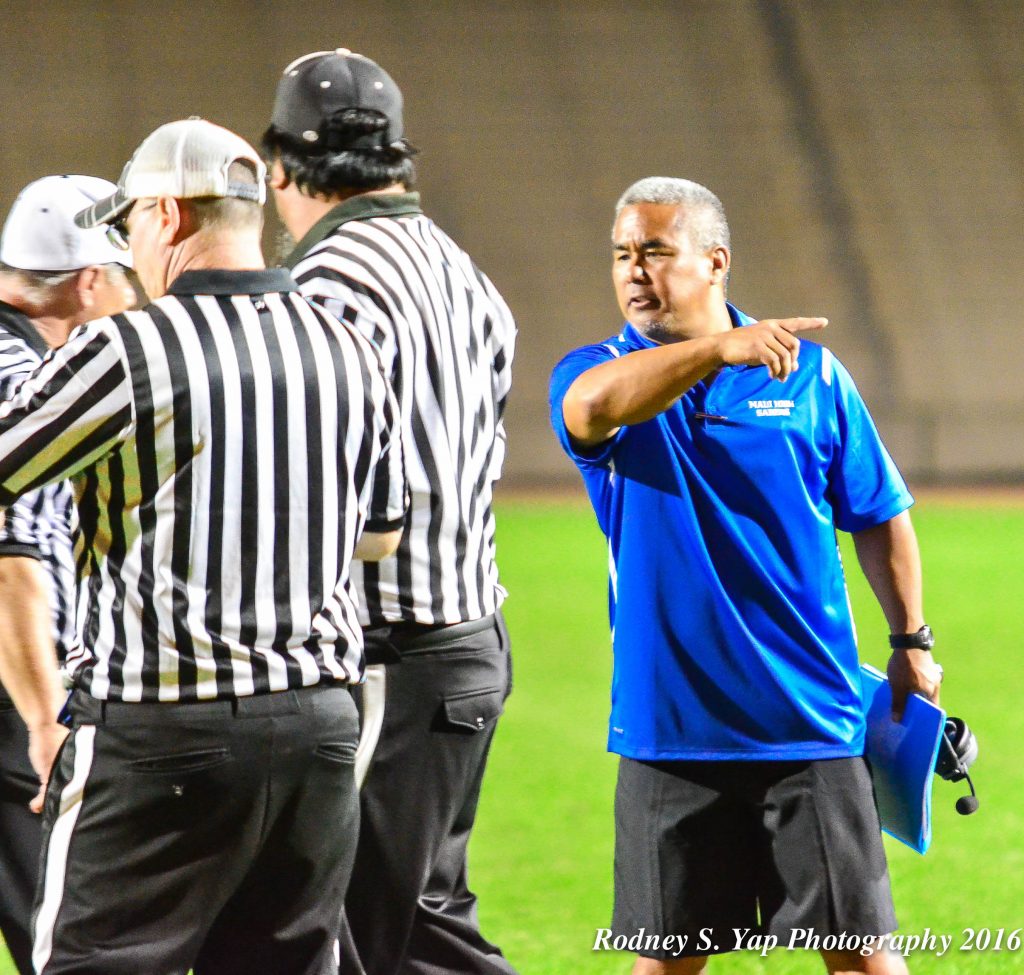 Maui High School is fixing to hire its fourth football coach in 10 years, confirming the resignation of Keith Shirota, a Saber graduate and long-time educator on the Lono Avenue campus.

Last week Friday, Shirota chose to step down and made his decision official following a meeting with the school’s athletic director Michael Ban and principal Jamie Yap. The move ended his 26-month stint as head coach, the shortest among Maui’s previous three title-holders, including David Bui, who guided the team back to its glory days with a Division I championship in 2014 and its first state tournament appearance in 14 years.

The Maui Interscholastic League school alerted the media of Shirota’s decision on Wednesday, citing the 1984 graduate’s reason for stepping down as “personal.” Attempts to reach Shirota were unsuccessful.

“We thank him for his time and effort . . . and all he’s done for the school, the kids, and the program.” 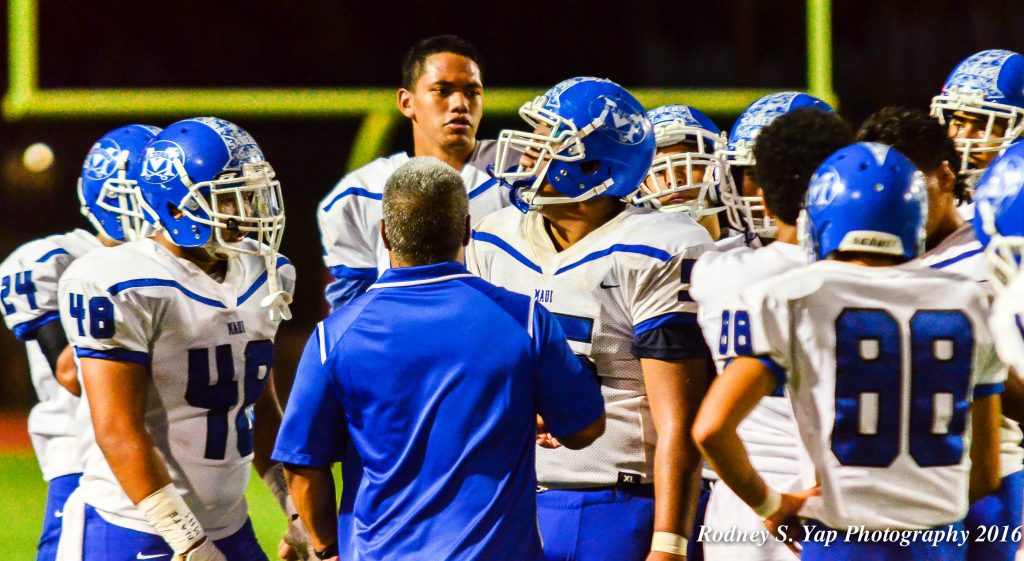 Shirota played under Curtis Lee, the one-time winningest active coach in the state and the school’s most decorated gridiron mentor with a 129-69-7 career record that included nine MIL titles in 21 seasons.

Shirota later replaced Lee as a P.E teacher and strength coordinator when the former coach retired in 2008.

“We want to thank Mr. Shirota for the great job he did supporting Maui High School, its student-athletes and the football team. We wish him the best. We are also excited about the future of the program and look forward to hiring the next head coach.”

Shirota told the players of his decision on Monday, and on Tuesday he addressed the parents.

Yap said with the exception of Alika Fuentes, the team’s quarterback coach last year, all of the current assistants have expressed interest in continuing to coach at Maui High.

Ban said all interested coaches outside the school should send their respective resumes to the athletic department by Tuesday, April 11.

Among the prominent staffers with Saber history are Kamaloni Vainikolo, a 2006 Maui High graduate and MIL All-Star who began his career playing defensive tackle for Coach Lee and later at Utah State (2009-2010). Vainikolo was the team’s defensive coordinator in 2015 and has coached the defensive line on and off for the last five years, including 2016 Maui News’ Defensive Player of the Year Feleti Afemui. 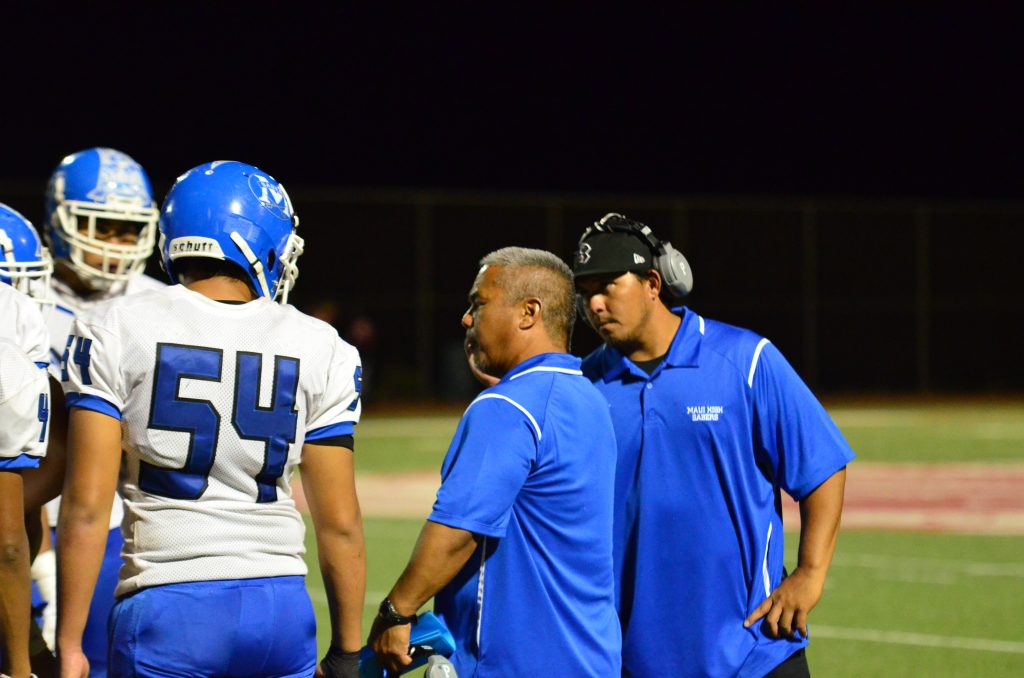 During a time out last year at War Memorial Stadium, Keith Shirota (middle) talks to his Maui High offense about the schedule for the weekend. Photo by Rodney S. Yap.

Vainikolo’s Polynesian reach has been instrumental in helping the Sabers both on and off the field.

Defensive backs coach Donnie Blackwelder has been on staff since 2012, while Lono Kaina started with the Sabers’ junior varsity team two years ago and served as the team’s defensive coordinator last year.

In addition, Michael Felicilda Jr. was the junior varsity head coach two years before being promoted to offensive coordinator in 2016.

Maui High opens its 2017 non-league schedule in early August, hosting Kapaa in week one and traveling to Oahu to face Damien in week two.