A new study evaluated conservation actions that could help save the Hawaiian Honeycreeper bird, also known as the “Iʻiwi.”

The study demonstrated how the movement of Iʻiwi across the slopes of Hawaiʻi’s volcanoes in search of nectar from flowers can increase their risk of contracting disease and dying. 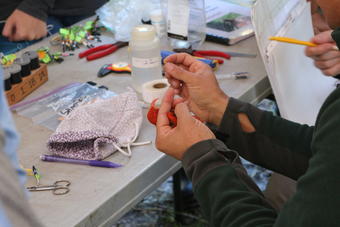 Iʻiwi are highly susceptible to introduced avian malaria, which is transmitted by a tropical mosquito that only occurs at low to mid-elevations of Hawaiʻi. Iʻiwi breed only in high-elevation forests where the temperatures are too cool for the mosquito to occur, but their flights to find flowering trees can take them to where diseases occur.

“Iʻiwi evolved over millennia to track flowering trees up and down the slopes of Hawaiʻi’s volcanoes. Their flights to seek out blooming flowers allowed them to thrive across the Hawaiian Islands in the past,” said Dr. Eben Paxton, co-author of the study and researcher with the U.S. Geological Survey. “Today, however, with avian disease rampant at low and mid-elevations of the islands, these movements could lead to their extinction.”

Warming temperatures are providing mosquitoes and the diseases they carry to move into increasingly higher elevation mountain forests, leading to increased contacts with Iʻiwi.

As a result, Iʻiwi have gone from being one of the most common native birds in Hawaiʻi over 100 years ago, to now being a species limited to remote forests and in danger of extinction.

Researchers tracked Iʻiwi movements by attaching small radio transmitters to the birds and followed their signal as they moved across the forests of Hakalau Forest National Wildlife Refuge and beyond. The movements were mapped with the current distribution of avian malaria and future disease distributions under climate change. Researchers were then able to evaluate how the current and future distribution of disease are likely to affect Iʻiwi populations.

The study showed that after the breeding season, Iʻiwi leave their disease-free breeding areas in search of blooming trees and travel to lower elevations where disease is present. As disease expands into increasingly higher elevation areas because of increasing temperatures, disease-free areas are projected to vanish and Iʻiwi rapidly decline.

The study indicates that Iʻiwi may go extinct by 2100 if action is not taken to control avian diseases and secure disease-free habitat.

The study evaluated the benefits of increasing habitat and availability of nectar at high elevations, reducing mosquito numbers, and promoting the evolution of disease resistance.

“There is nothing more spectacular than seeing the elegant profile of a scarlet Iʻiwi against a deep blue Hawaiian sky as it feeds in the brilliant red blossoms of Lehua in our native forest. The decline of this magnificent and culturally important bird is an irreplaceable loss to our natural heritage in Hawaiʻi,” said Dr. Samuel M. ‘Ohukani‘ōhi‘a Gon, III, Senior Scientist and Cultural Advisor, The Nature Conservancy of Hawaiʻi.

“The Iʻiwi, as our “canary in the coal mine,” provides a clear warning of the threats moving into Hawaiʻi’s last sanctuaries for not only rare bird species, but our entire island ecosystem. Conservation efforts to save Iʻiwi are urgently needed to ensure that future generations will continue to see the living legacy of our unique island home. Those efforts will benefit not only Iʻiwi, but all life in our islands,” ‘Ohukani‘ōhi‘a Gon added.

The journal article “Altitudinal migration and the future of an iconic Hawaiian honeycreeper in response to climate change and management” was published in Ecological Monographs with lead author Alban Guillaumet of the Hawai‘i Cooperative Studies Unit at the University of Hawai‘i at Hilo, Wendy Kuntz of Kapiolani Community College, Michael Samuel with the USGS Wisconsin Cooperative Wildlife Research Unit, and Eben Paxton with the USGS Pacific Island Ecosystems Research Center. 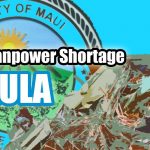 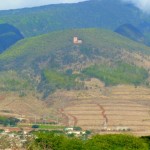