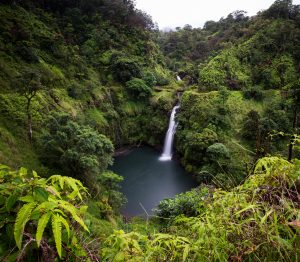 On March 31, the Maui Department of Water Supply declared a Stage 1 water shortage [1] for the Upcountry district of Maui that went into effect on Sunday, April 9, due to reduced surface water flow and lack of rain. Today, the DWS announced it is continuing its declaration of a Stage 1 water shortage in the Upcountry district and it will continue until further notice. 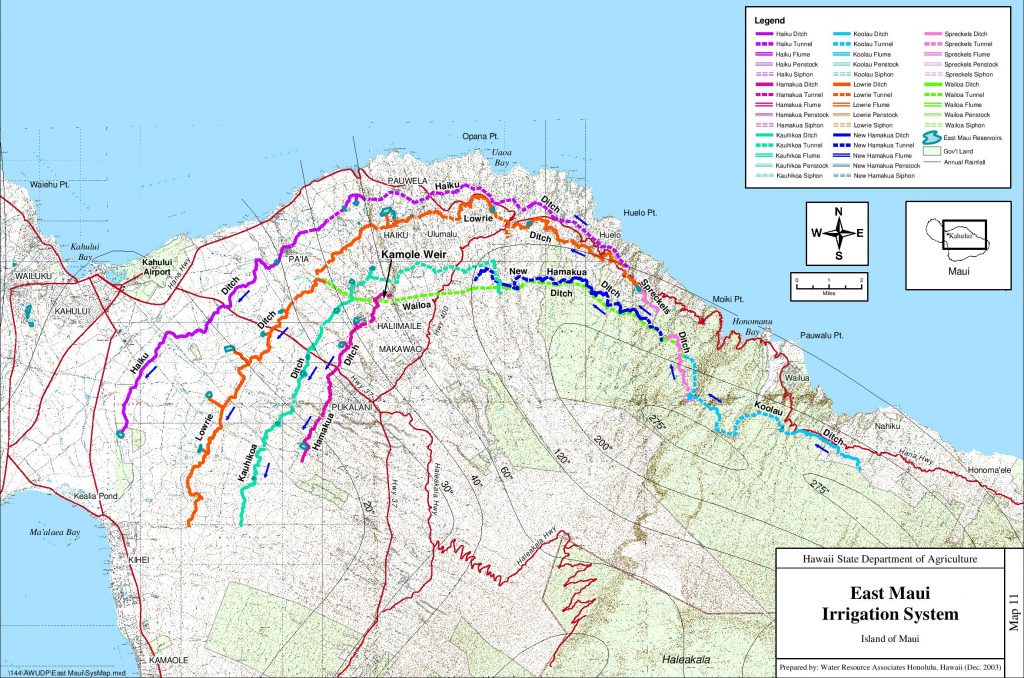 This map shows where Upcountry residents get their water from. The map also shows the locations of the watersheds which depends on rainfall to provide water to the water treatment facilities. Photo from Hawaii Department of Agriculture.

The DWS said in a release today, “due to the fluctuation in the flow of water and the fluctuation in the amount of rain, water levels can vary drastically which may require the declaration to go from a Step 1 one day to a Step 3 the following day. It is critical that Upcountry consumers take this Stage 1 water shortage seriously by doing their part to conserve.”

The DWS operates three surface water treatment facilities that service the Upcountry area and each of those plants receives water from a particular area of the watershed.

Kamole Weir which gets its water source from Wailoa Ditch and services Makawao, Pukalani, Haliʻimaile and Haʻikū. According to the Water Department website, Kamole is the largest surface water treatment facility on Maui and relies on flow from the Wailoa Ditch. It is also the primary source of water for nearly all of Upcountry during times of drought. Kamole’s average daily production is 3.6 million gallons per day.

Piʻiholo gets its water source from Waikamoi Forest and services the Lower Kula area. The facility is located in the Makawao Forest Reserve adjacent to the Piʻiholo Reservoir. Piʻiholo’s average daily production is 2.5 million gallons per day.

Some Upcountry residents have reported seeing some heavy rainfalls so far this year, however, Taylor notes that the public’s perception of rainfall may not be indicative of rainfall at the watersheds.

“There watershed areas are located in relatively remote areas,” he said. “Only rainfall in these particular areas increase DWS water supply, people may be experiencing rainfall in other areas which do not translate into water supply for DWS,” he added.

As dry season approaches, Maui residents, especially Upcountry residents, should be concerned with the lack of rainfall in these watershed areas.

“Our watershed areas are already relatively dry. A single, multiple day rain even in the right location could, potentially, resolve the concern for a month or more,” Taylor said. “Normal tradewind weather with ongoing light rains could also resolve these issues, whether or not such events will occur is unknown,” he added.

NOAA statistics [3] regarding Maui rainfall prepared on April 5, 2017 show a decline in precipitation so far this year.

So what happens when a Stage 2 Shortage happens?

Rates are currently as follows:

The National Weather Service also released it’s March 2017 summary of Maui’s month-to-month precipitation report on April 5, and stated: “Many of the leeward gages on the island of Maui recorded near to above average rainfall while most of the windward totals were in the below average range for the month of March. Most of the March totals from Molokaʻi and Lānaʻi were in the below average range. The USGS’ gage at West Wailuaiki Stream had the highest monthly total of 8.63 inches (30% of average) and the highest daily total of 3.04 inches on March 8. The USGS’ gage at Puʻu Kukui (5.09 inches, 13% of average) posted its lowest March total on record. The previous record was 6.74 inches set just last year. Contrasting the Puʻu Kukui dryness, March totals from Kahului Airport and ʻUlupalakua Ranch were the highest since 2006.

Nearly all of the rainfall totals for 2017 through the end of March were in the near to below average range across Maui County. ʻUlupalakua Ranch is the sole exception where its year-to-date total of 12.57 inches checks in at 127% of average.”

The NWS February report for Maui concluded by saying, “Although there were wet conditions in some areas of the county, the very dry conditions in January put the rainfall totals deep into deficit territory to start the new year.”