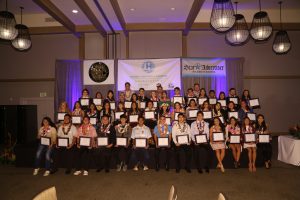 The Hawai‘i Lodging & Tourism Association awarded 42 seniors from public high schools across the state $1,000 in scholarships for their post-graduate educations. Five Maui students, one Moloka‘i student and one Lānaʻi student were awarded scholarships at a luncheon held at The MODERN Honolulu yesterday. 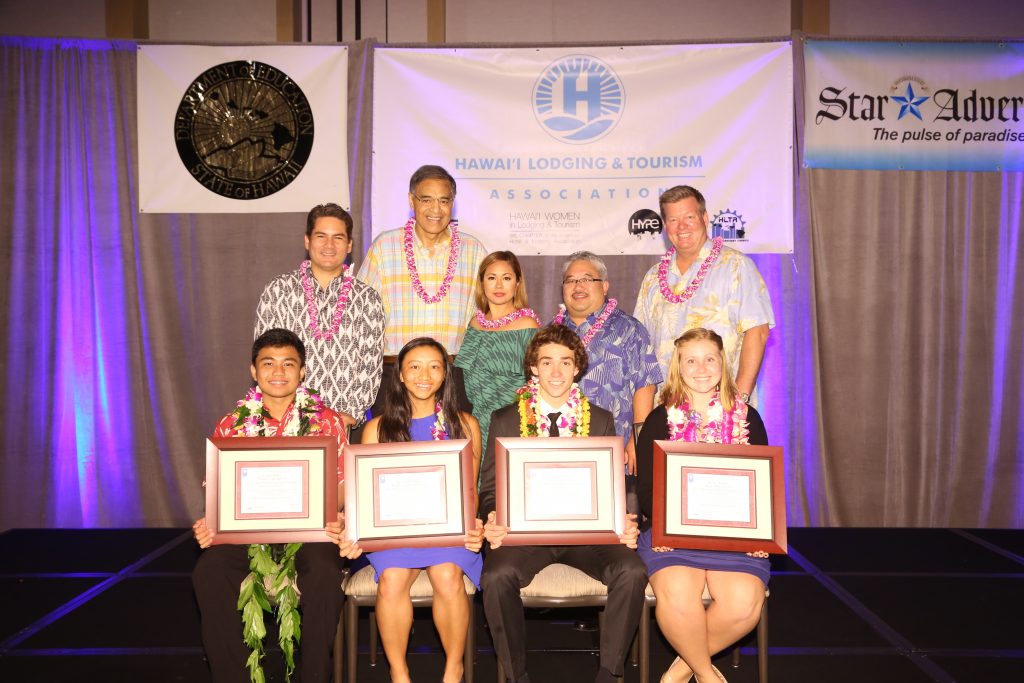 Jaccie Hisashima of Maui, Lester Iwata of Hawai‘i Island, Truman Spring of O‘ahu and Grace Yatsko of Kaua‘i were recipients of a $2,500 scholarship from the HLTA Photo Courtesy

The students were selected by the Department of Education for scholastic achievements and school and community service. Each student had to have a minimum 3.2 grade point average and an extensive record of school and public service.

The scholarships, known as the Citizen-Scholar Awards, is a partnership of the HLTA, Honolulu Star-Advertiser, and Department of Education.

This year, four additional $2,500 scholarships were awarded to the top student from each of the state’s four counties.

“Hawai‘i’s hospitality industry has been proud to honor the future leaders of our state and nation,” Mufi Hannemann, HLTA president and CEO, said. “These seniors have been selected by dint of their scholastic success as well as their invaluable contributions to their schools and our community. They represent the best of your youth devoting themselves to volunteerism and public service, and we’re delighted to recognize them for their civic leadership and selflessness.”

Jaccie Hisashima, Maui
Over the course of her schooling at Kekaulike, Hisashima has devoted over a thousand hours of service to others. She is the student body president, as well as a member of the Key Club, STEM Club, tennis team, and a taiko group. Hisashima also returns every year to her elementary school to volunteer for events such as Read Aloud America and Pumpkin Math Night, where she teaches younger students STEM subjects. Hisashima will attend Chapman University starting Fall 2017.

Lester Iwata, Hawai‘i Island
Lester Iwata has been involved in community service since the beginning of his high school career at Waiakea. He is a Key Club member, Student Government Association secretary, and a varsity baseball athlete. Iwata is currently working on a project using computer drafting programs to draw a three-dimensional model of the Hokualaka‘i voyaging canoe. By using his STEM skills, Iwata hopes to educate the community on the history of the canoe and promote Hawaiian culture. Iwata will attend the University of Portland beginning this Fall.

Truman Spring, O‘ahu
Truman Spring of Kahuku High School is the vice president of his school’s National Honor Society, captain of the Kahuku Speech & Debate team, vice president of the Drama Club, and captain of a soccer club. He is a History Day competitor who has placed in the top 10 nationally for four years, including a first-place finish. When several students from his community lacked the financial resources to compete in National History Day in Washington, D.C., a few years ago, Spring helped get the students to the competition by successfully obtaining a youth leadership grant that required 275 students to participate in 1,000 hours of service through community environmental sustainability projects. Spring will attend Brigham Young University – Provo starting this Fall.

Grace Yatsko, Kaua‘i
Grace Yatsko is president of her school’s Interact Club, member of the Civics Club, student representative for the Kapa‘a High School PTSA, and part of the National Honor Society. Yatsko also has extensive experience in volunteering with youth; she tutors first graders at Kapa‘a Elementary School, works part-time as a teacher’s aide at All Saints Preschool, and has served as a Ke Akua Youth Group leader and Sunday school teacher at her church. When a psychiatric rehabilitation organization called Friendship House was burglarized, Yatsko wrote an editorial in the local newspaper to help raise money for the organization and successfully raised nearly $500. Yatsko will attend Colorado State University starting this Fall.

“These four students represent all the finest attributes of our future leaders, and we couldn’t have selected better students to receive this special honor,” Hannemann added.

A complete list of the 2017 Citizen-Scholar Award recipients follows: