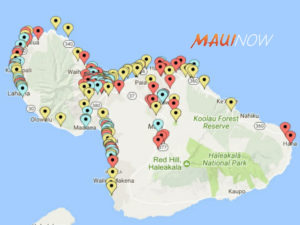 Lahaina and Makawao each had six burglaries reported in June, both saw a 50% decrease with three reported burglaries in July. One of the burglaries on Monday, July 17, at Maui Hands in Makawao resulted in over $20K worth of stolen items.

Pāʻia had a decrease in burglaries in July with two reported, down from the six in June.

Wailea, Waiehu, Waihe‘e, and Hāli‘imaile all had one burglary reported in July.

Kula and Hāna both had one more burglary than the month before, totaling four and two, respectively.

Spreckelsville and Waikapū had no burglaries reported in July.

Vehicle thefts were up 39% in July from the month before when 63 thefts were reported. Fourteen of the 87 stolen vehicles were mopeds or motorcycles. The majority of thefts occurred in Kahului with 25, followed by Kīhei with 19, Wailuku with nine, and Lahaina with seven.

Makawao, Māʻalaea, Waiehu, and Haʻikū each had three thefts reported in July.

Kāʻanapali had five reported stolen vehicles in July, when none were reported in June.

Spreckelsville and Wailea remained unchanged from the month before with zero thefts.

Kahului had a 118% increase in break-ins when 11 were reported in June, six of the 24 break-ins in July were at Kahana Beach Park.

Makawao and Lahaina had three break-ins each reported in June, both saw an increase of eight and nine, respectively. Six of the eight break-ins in Makawao happened at Waihou Springs Trail. 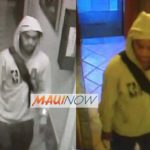 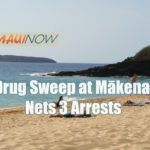