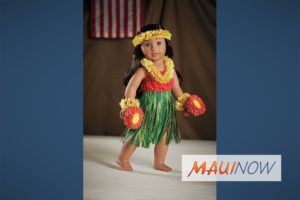 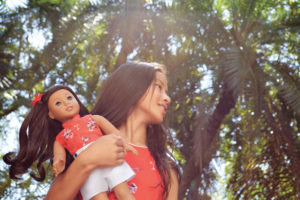 Nanea is a 9-year-old who loves her close-knit extended family, hula dancing, fishing with her father, and playing with her dog, Mele. Photo Courtesy

Nanea is a Hawaiian girl growing up on the island of O‘ahu in 1941. Her story explores what life was like in the weeks leading up to and the aftermath of the attack on Pearl Harbor on Dec. 7, 1941, and the US entry into World War Two.

American Girl says that Nanea’s story illuminates how the courage, patriotism, and aloha spirit of the Hawaiian people inspired a nation at war and shows how one girl can make a meaningful difference in the face of big change.

“Our BeForever line is about building a bridge of understanding, helping girls today see the interconnectedness—the feelings, experiences, hopes, and dreams—that exists between themselves and girls from long ago,” says Katy Dickson, president of American Girl. “We hope Nanea’s powerful story of resilience, responsibility to others, and contributing for the common good—or kōkua, as it’s known in Hawai‘i—will resonate with girls and show them they have the power within to face the obstacles that come their way.”

Nanea is a 9-year-old who loves her close-knit extended family, hula dancing, fishing with her father, and playing with her dog, Mele. Nanea is also eager to “dip her paddle in” to be useful at home and at her grandparents’ store. When Pearl Harbor—the naval base where her father works—is attacked by Japan, the peaceful existence the Mitchell’s and their neighbors enjoy is replaced with martial law, and rumors of additional attacks and frequent air-raid drills have everyone on edge.

Amid the chaos and uncertainty, Nanea embraces her spirit of aloha and deeply held belief in kōkua—doing good deeds and giving selflessly—to do her part for the war effort and help restore peace to her beloved Hawaiian home. Nanea’s story was written by Newbery Honor Award-winning author Kirby Larson.

In addition to the stories, the Nanea collection features an 18-inch doll with an all-new face mold, hazel eyes, and dark brown hair, plus several 1940s-era, Hawaiian-inspired doll outfits and Nanea-inspired apparel for girls.

Numerous authentic-to-the-era accessories include Nanea’s Hula Outfit and Hula Implements and Nanea’s Family Market, with 90 pieces, including a wooden store with a movable counter, food, supplies, displays, and more.

American Girl says it worked closely with a five-member advisory board who provided their expertise in Hawaiian culture, language, and history to inform all aspects of Nanea’s development to ensure the historical accuracy and cultural authenticity—including the doll, books, outfits, and accessories. The board included a Collection Manager from the Bishop Museum, a hula and quilting expert, an eye witness to the bombing of Pearl Harbor and a Hawaiian Language professor from UH Mānoa.

The O‘ahu Visitors Bureau partnered with American Girl for a sweepstakes in anticipation of the launch of Nanea.

One winner will have the chance to win a family getaway for four to O‘ahu, which includes round-trip travel on Hawaiian Airlines, a four-night stay at The Royal Hawaiian, tickets for four to the ‘Aha‘aina’ Lū‘au Show, a visit to two attractions at Pearl Harbor, and a Nanea doll.

“The O‘ahu Visitors Bureau is excited to partner with American Girl for the launch of their new historical character, Nanea Mitchell,” said Noelani Schilling-Wheeler, Executive Director of O‘ahu Visitors Bureau. “Nanea’s story focuses on the bombing of Pearl Harbor and its aftermath, illuminating for girls today the courage and aloha spirit of islanders whose home-front experience during World War Two was unlike that of mainland Americans.”

American Girl is also introducing the following activities and events:

Nanea Retail Events: On August 25 and 26, American Girl’s retail stores will host special debut events including a hula demonstration, a fun free craft, a doll drawstring bag giveaway, and a chance to win a Nanea doll. Nanea-themed events will also be held at the American Girl stores throughout the year.

Nanea Videos and Online Play: Behind-the-scenes videos on Nanea’s story and development, along with fun Hawaiian-themed craft and activity videos, are available on American Girl’s YouTube channel [2]. Girls can also visit the Nanea-dedicated site [3] for book excerpts, games and quizzes, wallpaper, and much more.

The Nanea product collection will be available on Aug. 21, 2017, on the American Girl website [5]; through American Girl’s catalogue; at all American Girl retail locations nationwide; at American Girl specialty boutiques at select Indigo™ and Chapters™ in Canada and El Palacio de Hierro locations in Mexico City.

The Nanea books can also be purchased through retail and online booksellers.