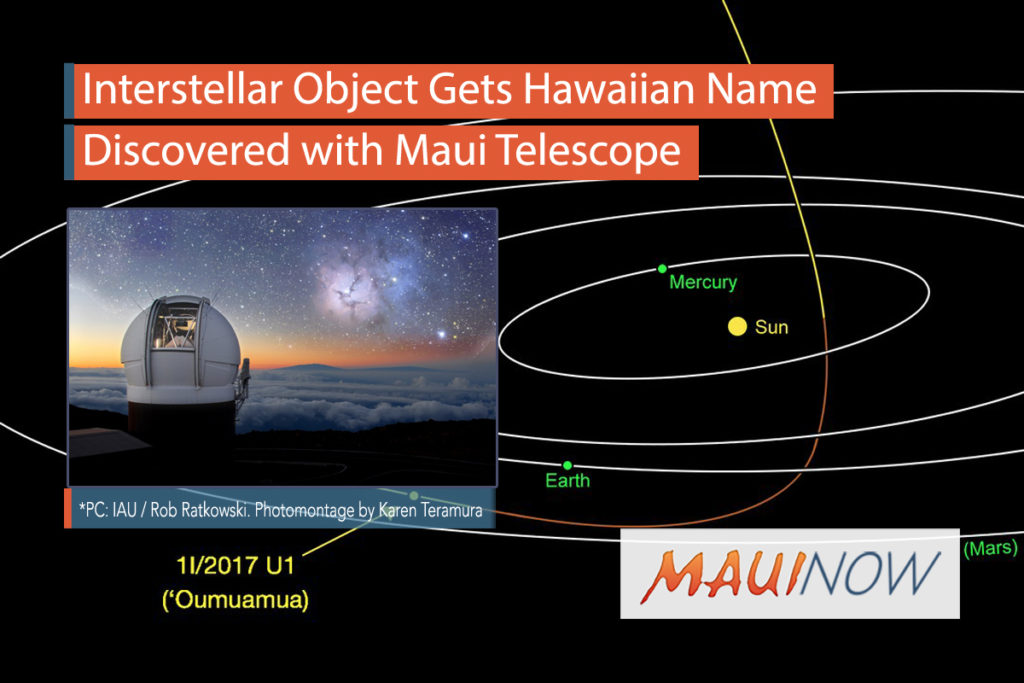 Background image: 1I/2017 U1 (ʻOumuamua), previously known as C/2017 U1 (PANSTARRS) and A/2017 U1, approaching from above, it was closest to the Sun on 9 September. Traveling at 44 kilometres per second, the comet is headed away from the Earth and Sun on its way out of the solar system. PC: International Astronomical Union. Courtesy Photo of the Pan-STARRS 1 telescope atop Haleakala, Maui by Rob Ratkowski. Photomontage by Karen Teramura using an image of the Trifid Nebula taken with this telescope.

The interstellar object that was discovered last month with the Pan-STARRS 1 telescope atop Haleakalā on Maui, now has a name — ʻOumuamua, as proposed by the Pan-STARRS team.

The International Astronomical Union made the announcement saying that, “In Hawaiian ‘Oumuamua means ‘a messenger from afar arriving first’ that quite appropriately reflects the nature of the object and its discovery.”

The Hawaiian Dictionary (Ka puke wehewehe a Pukui/Elbert), defines ‘oumuamua as: “n. Leader, as in battle or other activity; scout.”

The Hawaiian name is in addition to its official name, “1I/2017 U1,” handed down by the IAU Minor Planet Center.

According to the the IAU, the object was initially classified as a comet and later as an asteroid; however, “further observations indicated that because of its hyperbolic orbit and record-breakingly high eccentricity, the object was never gravitationally bound to the Solar System: a prototype of a new class of objects, an ‘interstellar asteroid,’ had been discovered.”

The discovery was made on Oct. 19, 2017 by Dr. Robert Weryk, a postdoctoral fellow at the Institute for Astronomy.

This object, at the time was described as “less than a quarter-mile in diameter” and astronomers said that it was moving “remarkably fast.”

According to information released by the IfA, Weryk assessed that the object came from outside of the solar system, saying its motion could not be explained using either a normal solar system asteroid or comet orbit.

Astronomers said the object came from the direction of the constellation Lyra, made a hairpin turn under our solar system, passing below Earth’s orbit on Oct. 14, and then “shot back up,” speeding toward the constellation Pegasus.

The International Astronomical Union has announced that the object did not fit into any existing designation scheme, so a new one was defined by the IAU Minor Planet Center.

According to the IAU announcement, it is expected that the discovery of 1I/2017 U1 (ʻOumuamua) will “soon be joined by discoveries of more of such interlopers entering the inner Solar System from interstellar space.” 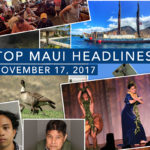 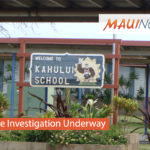