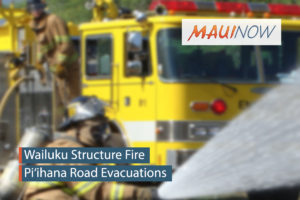 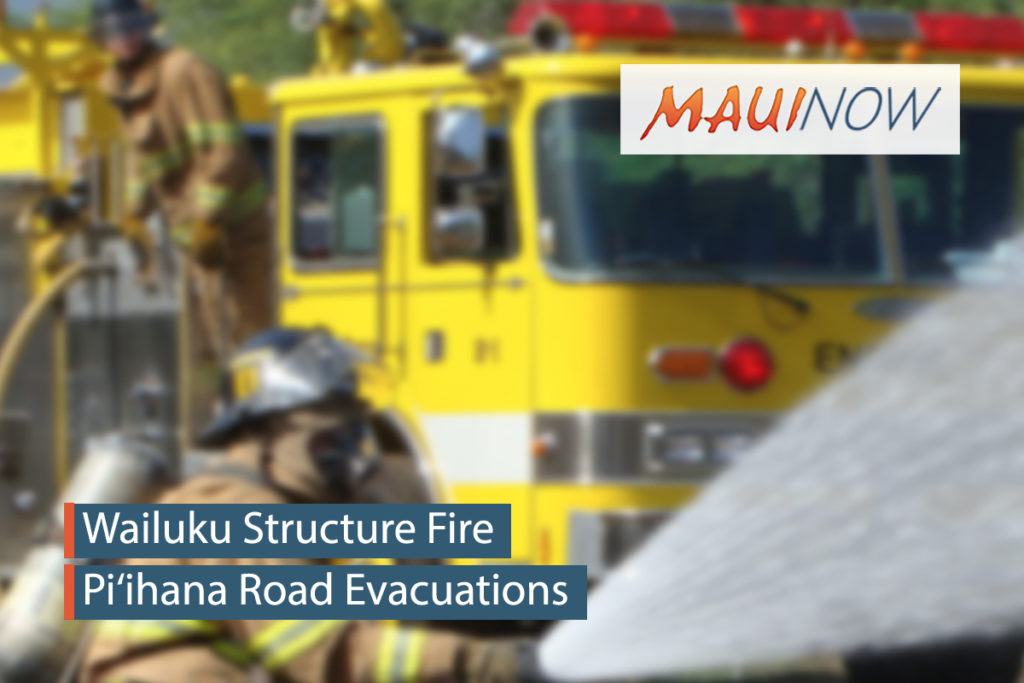 At 8:33 a.m. on Monday, Nov. 20, 2017, firefighters responded to a structure fire at the Kahekili Terrace Apartments on Piʻihana Road in Happy Valley.

When firefighters from Wailuku arrived at 8:37 a.m., flames and heavy black smoke were coming from the 1st and 2nd floor windows of the 2-story apartment. Crews had the fire under control at 8:52 a.m. and extinguished at 9:52 a.m.

Five people were in the apartment when the fire erupted. Two adult females and a one-year-old boy were asleep in the upstairs bedrooms. Two 3-year-old girls were downstairs playing in the living room/kitchen area. After the smoke alarm activated, the children saw the fire in the kitchen and one of them went upstairs to wake the adults. All were able to evacuate the home without any injury.

A 47-year-old woman, her 14-year-old daughter and 11-year-old son who occupy the apartment were displaced by the fire, but are now being housed in another unit within the same complex. Her children were at school when the fire broke out.

The other adult female and 3 children that were in the apartment at the time were relatives visiting the woman and do not reside in the home.

The fire started in the kitchen. The cause of the fire was determined to be accidental and was related to the children playing in the kitchen. Damage to the 3 bedroom unit was estimated at $160,000 to the structure and $30,000 to contents.

The Red Cross are assisting the family with their needs.

Two engine companies, a rescue crew and a battalion chief from Wailuku and Kahului responded to the structure fire.

Today’s incident drives home the importance of having properly installed and working smoke alarms in your home. Had there been no smoke alarm, the outcome could have ended much more tragically.

The National Fire Protection Association (NFPA) recommends installing smoke alarms in every sleeping room, outside of each separate sleeping area, and on every level of your home. If there is a fire in your home, smoke spreads quickly and every second counts. Smoke alarms can alert you early enough so you can get out.

Emergency crews are responding to a structure fire at 1837 Piʻihana Road in Wailuku.

Residents have been evacuated.

The immediate area has been closed off.