Wet weather and record rainfall are among the news highlights from this past week.  As Maui heads into the holiday weekend, here’s a look at some of the stories that topped the headlines in recent days.

A White Christmas! On Maui?

The summit of Haleakalā had a light dusting of snow on Thursday morning, but not enough to stick around for long. Winter weather is not unheard of on the summit of Haleakalā. In fact, there was a double dose of it in March of 2015 when it snowed twice in one week. Frosty conditions were also reported last month–that’s when humid air sticks to the ground and freezes into ice.

Record rainfall amounts were also recorded on Maui during this week’s wet weather event.  A record of 5.78 inches of rain was set in Kahului on Wednesday, breaking the old record for the same day of 3.21 inches set in 1955.  Twenty-four-hour rain totals (through 5 a.m. on 12.21.17) were in excess of 8 inches at rain gauges at West Wailuaiki (8.32) and Wailuku (8.35).  Drier weather is expected by Sunday and on Christmas Day, but another front may bring increased showers by Tuesday.

Foul play is not suspected in an incident in which a 13-year-old juvenile fell six floors from a condominium window in Kīhei at around 9:28 a.m. on Sunday, Dec. 17, 2017.  The teen was transported to the hospital in critical condition and suffered life-threatening injuries.

Maui police arrested and charged a 17-year-old juvenile Kahului male for arson in connection with an investigation into a fire that destroyed several classrooms at Kahului Elementary School over the Thanksgiving weekend. The arrest was made on Friday, Dec. 15, 2017. 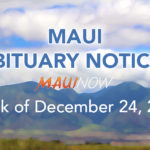 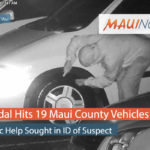