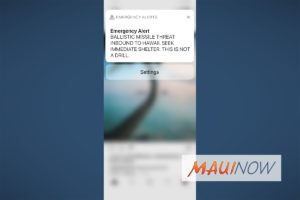 TV stations were also showing the Emergency Notification on certain channels. The red TV alert stated, “The US Pacific Command has detected a missile threat to Hawaii. A missile may impact on land or sea within minutes. This is not a drill. THIS IS NOT A DRILL. If you are indoors, stay indoors. If you are outdoors, seek immediate shelter in a building. Remain indoors well away from windows. If you are driving, pull safely to the side of the road and seek shelter in a building or lay on the floor. We will announce when the threat has ended. Take immediate action measures. THIS IS NOT A DRILL. Take immediate action.”

Sources tell Maui Now that some families were running from the beach, while others stayed behind, and others could be seen rushing to put their kids in their cars.

At 8:20 a.m. the Hawaii Emergency Management Agency sent out a tweet stating, “NO missile threat to Hawaii.”

In December, the state tested its nuclear warning siren for the first time since the end of the Cold War. However, on this day, no sirens went off. 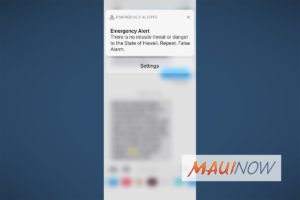 Around 8:45 a.m., US Senator Brian Schatz tweeted, “There is no missile threat. It was a false alarm based on a human error. There is nothing more important to Hawai‘i than professionalizing and fool-proofing this process.”

An Employee Pushed the Wrong Button

“It was a procedure that occurs at change of shift… and an employee pushed the wrong button,” Governor Ige said in a TV press conference around 10 a.m.

During the press conference, Vern Miyagi, Administrator of Hawaii Emergency Management Agency said, “It’s my fault,” although he wasn’t in the building when it happened. “This will not happen again,” he added.

Miyagi added that it was an inadvertent mistake that occurred during a change of shift and that there are three people involved in the shift. “That should have been caught, it should not have happened,” he added.

“There is a checklist that is in place and it should have been followed, I am going to look into this and investigate and this will not happen again,” he said.

“The change in shift routine happens three times a day, seven days a week, 365 days a year, and it occurs flawlessly—today there was an error and we will look into it to avoid it from happening again,” Gov. Ige said.

“We have been working to give the people of Hawaii as much notice as we can, obviously there was a breakdown in procedure that allowed the false alarm to occur,” Gov. Ige added.

Miyagi added that there is a cancellation process and that a text alert stating it was a false alarm should have been sent out right away and will look into it.

“We understand— I was awaken by the alert like everyone else in Hawaii, it was unfortunate and regrettable and we are informing the public as soon as possible. We definitely need to improve our procedures that when it is an error we can inform the public quickly,” Gov. Ige added.

Sen. Schatz again tweeted, “AGAIN FALSE ALARM. What happened today is totally inexcusable. The whole state was terrified. There needs to be tough and quick accountability and a fixed process.”

A state investigation into what caused the false warning is underway.

“This appears to be a mistake, but that doesn’t mean we can’t learn from this, and we should,” said Communication Director Rod Antone. “Remember that if this attack had been real, people should ‘get inside, stay inside and stay informed.’

What this means is that if you’re out shopping, stay in the store; if you’re at home stay at home. Don’t go driving anywhere. Turn on the radio or television and listen to the news,” Antone added.

A guidance summary of what to do in the event of an actual attack can be found here. For more information, contact the Maui Emergency Management Agency at 270-7285. 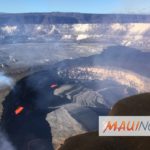 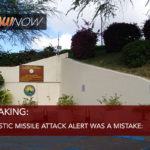