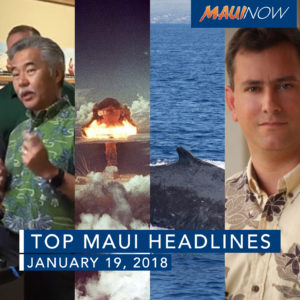 Here are some of the important headlines and stories you need to know around Maui, in this brief newscast with Maui Now’s Kiaora Bohlool.

People in Hawaiʻi woke up to quite a scare on Saturday morning when a ballistic missile alert stating that a missile was inbound to Hawaiʻi was imminent and to seek immediate shelter. The text alert sent a wave of panic across the state and left government officials answering questions as to why a retraction alert wasn’t sent out immediately. Our Nikki Schenfeld spoke with Governor Ige in an exclusive phone interview [1]. You can read more on their conversation by checking out our website.

During the 38 minutes of panic across the state, parents were seen putting children into manholes and rushing children into cars, some were calling their families to say goodbye and putting them into bathtubs while parents struggled to tell them what was going on. Our Malika Dudley spoke with a local child psychologist [2] on the affects this incident could have on our youth. You can check out that interview as well on our website.

Many believe Hawaiʻi wasn’t ready for a ballistic missile attack, would you know what to do? Maui Now breaks down what you should know before, during and after an attack [3] and lists what everyone should have in case the alert was real on our website.

An entangled humpback whale was freed off Mākena Beach [4] on Friday. The animal was trailing more than 285 feet of braided line from its mouth. All gear was successfully removed and recovered. Gear will be analyzed towards determining its possible origins and trying to reduce entanglement threat in the future.