A 52-year-old man from Saint Paul, Minnesota died after being pulled unresponsive from waters off of Olowalu on Friday morning.

Fire officials say the man was in the water with other passengers on a snorkel cruise in West Maui when the incident occurred at 11:15 a.m. on Friday, Jan. 26, 2018.

According to department reports, crew members aboard the Teralani 2 vessel noticed that the man, who was snorkeling in a group, had not moved for a while and went to check.

After finding the man floating face down and unresponsive near the vessel, the crew brought the man onboard and began administering CPR.

Emergency crews responded to the Lahaina Harbor to await the arrival of the catamaran, and boarded the vessel to take over CPR at 11:53 a.m.

Paramedics and firefighters continued advanced life-saving measures on the male victim; however, despite all efforts the man could not be revived and was pronounced dead at the harbor.

Firefighters from Lahaina and a Kīhei paramedic crew responded to the incident.

There were two scuba deaths on Maui on Friday, Jan. 26, 2018.  A 52-year-old man from Saint Paul, Minnesota died after being pulled unresponsive from waters off of Olowalu while on a snorkel cruise on Friday morning. The other involved 62-year-old male visitor from Salem, Oregon who died after he was found floating face down in the ocean in Kā‘anapali while snorkeling with a friend on Friday afternoon.

On Saturday, Jan. 27, 2018, a 71-year-old man from Berkeley, California was revived and transported to the hospital in critical condition after he was found floating face down while snorkeling in South Maui waters on Saturday.  *Update: The man has since died and marks the ninth death in two weeks on Maui since Jan. 14, 2018. 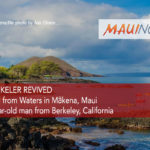 UPDATE: Snorkeler Pulled from Waters in Mākena, Has Since Died 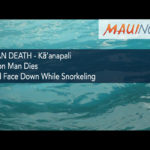