The mayors of Honolulu, Kauaʻi and Maui today pledged to help make our island state more climate resilient at a key leadership forum presented by Hawaiʻi Energy and Chamber of Commerce Hawaiʻi, titled “A Resilient and Renewable Hawai‘i: How Hawai‘i’s Mayors are Innovating to Create the Counties of the Future.” 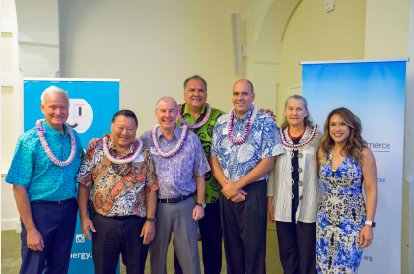 Hawai‘i County mayor Harry Kim was represented by his Director of the Department of Research and Development, Diane Ley, whose contributions included sharing the distinct challenges facing the state’s largest and southernmost island.

Today’s forum was held at the YWCA Laniakea in Downtown Honolulu.

“Honolulu is leading the way when it comes to the renewable energy revolution,” said Mayor Caldwell. 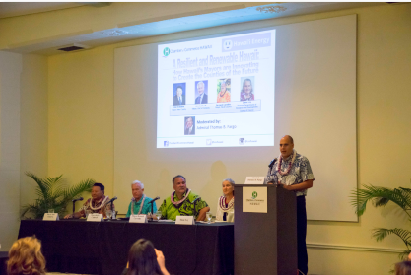 “Whether it’s living up to the Paris Agreement, moving to 100 percent renewable transportation by 2045, or installing efficient LED street lighting island-wide, the overwhelming majority of people on O‘ahu recognize that climate change is real and we can’t wait for others to take action. My administration continues to promote sustainability and resiliency actions to protect our island community in the face of sea level rise, and we appreciate the lively dialog during this forum that was sponsored by Hawai‘i Energy and the Chamber of Commerce Hawai‘i,” said Caldwell.

“The people of Kauaʻi know all too well the catastrophic effects of a direct hit by a hurricane. While the road to recovery was long and challenging, it gave our community an opportunity to prove our resiliency. As an island chain, we have to be realistic about our vulnerabilities,” said Mayor Carvalho. “By working together to update our building codes, increase our shoreline setbacks, and improve the way we design our streets and neighborhoods, we can better prepare ourselves for the effects of climate change and the potential impact of a natural disaster.” 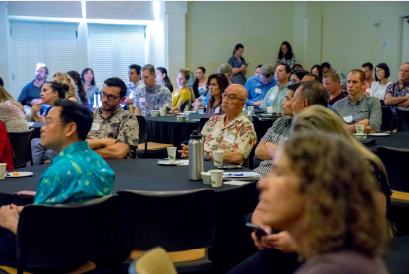 Audience members listen intently at A Resilient and Renewable Hawaii: How Hawaii’s Mayors are Innovating to Create the Counties of the Future.

“Renewable energy is one of the key components to a resilient future,” said Mayor Arakawa. “In order to be more resilient, we must cautiously evolve in a way that allows you to move forward but still remain open to new technologies.”

“As you all know, Mayor Harry Kim has served as the head of our emergency operations for many years. Emergency preparedness is his number one [priority] and it’s something we respond to as his cabinet. We push the message for both residents and businesses to be prepared,” Diane Ley shared with today’s audience. “We’ve got a lot of work to do. Our sustainability and energy programs across the county are working closely together with our partners in the private sector and in the education sector, so we’re really proud of that.”

“We at Hawaiʻi Energy would like to express our deepest gratitude to our mayors and Chamber of Commerce Hawaiʻi for their commitment to strengthening our island community. Living in the middle of the Pacific, we mutually understand the importance of steady preparedness and resiliency,” said Brian Kealoha. “Energy efficiency is an important piece of Hawaiʻi’s resiliency puzzle. By reducing waste and minimizing our footprint on the environment, we allow for renewable energy and energy storage systems to be scaled down in size and, most importantly, become more cost effective.”

“We are pleased to partner with Hawaiʻi Energy on this and other initiatives to help inform businesses and collaborate with different stakeholders to create a more resilient state,” said Sherry Menor-McNamara. “In addition to energy efficiency and conservation, building resiliency to deal with and recover from natural and other disasters also translates to a more resilient economy, leading to higher productivity, lower losses and, ultimately, a faster recovery following an event.”

Then in December, the mayors thrust Hawaiʻi to the forefront with their counties being the first in the nation to pledge to eliminate fossil fuels from their ground transportation fleets by 2045 – coinciding with the state’s 100% clean energy goal to reduce the importing of fossil fuels and cut carbon dioxide emissions. 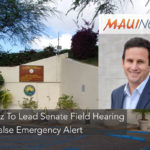 Sen. Schatz: "Missile Alerts Should be Handled by Federal Government" 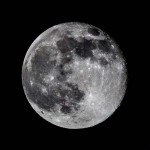