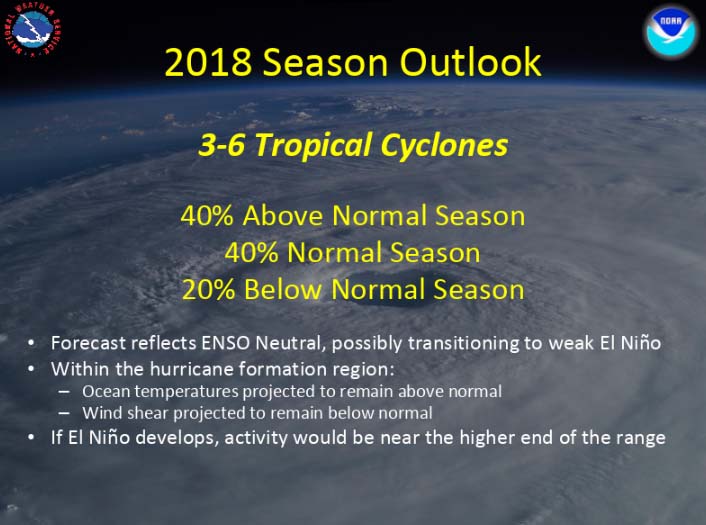 The National Oceanic and Atmospheric Administration’s Central Pacific Hurricane Center is predicting a near- or above-normal 2018 hurricane season.

The outlook calls for an 80% chance of near- or above-normal tropical cyclone activity during the Central Pacific hurricane
season this year.

The 2018 outlook indicates equal chances of an above-normal and near-normal season at 40% each, and a 20% chance of a below-normal season.

For the season as a whole, 3 to 6 tropical cyclones are predicted for the Central Pacific Hurricane basin. This number includes tropical depressions, named storms and hurricanes.

“This outlook reflects the forecast for ENSO neutral conditions, with a possible transition to a weak El Niño during the hurricane season. Also, ocean temperatures in the main hurricane formation region are expected to remain above-average, and vertical wind shear is predicted to be near- or weaker-than-average,” said Gerry Bell, Ph.D., NOAA’s lead seasonal hurricane forecaster at the Climate Prediction Center.

Bell added, “If El Niño develops, the activity could be near the higher end of the predicted range.”

This outlook is a general guide to the overall seasonal hurricane activity in the Central Pacific basin, and does not predict whether, or how many, of these systems will affect Hawaiʻi. The hurricane season begins June 1 and runs through November 30.

“It is very important to remember that it only takes one landfalling tropical cyclone to bring major impacts to the State of Hawaii,” said Chris Brenchley, director of NOAA’s Central Pacific Hurricane Center. “As we begin this 2018 hurricane season, we advise all residents to make preparations now, by having and practicing an emergency plan and by having 14 days of emergency supplies on hand that will be needed if a hurricane strikes.”

The Central Pacific Hurricane Center continuously monitors weather conditions, employing a network of satellites, land- and ocean-based sensors, and aircraft reconnaissance missions operated by NOAA and its partners. This array of data supplies the information for complex computer modeling and human expertise, which are the basis for the center’s storm track and intensity forecasts that extend out five days.

Check the Central Pacific Hurricane Center’s website throughout the season to stay on top of any watches and warnings, and visit FEMA’s Ready.gov for additional hurricane preparedness tips. The seasonal hurricane outlook is produced in collaboration with NOAA’s Climate Prediction Center. 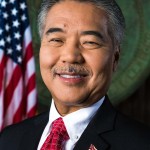 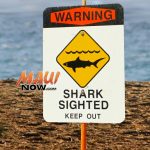