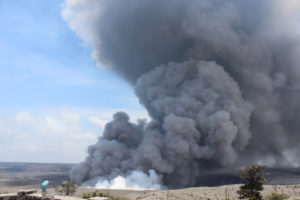 Sulfur dioxide emissions from Kilauea volcano’s summit have dropped to half the levels before the eruption activities began on May 3, according to a June 27 U.S. Geological Survey (USGS) Hawaiian Volcano Observatory report. However, volcanic gas emissions remain high from Fissure 8 and elsewhere along the East Rift Zone. These emissions are punctuated by bursts of ash and gas from intermittent explosive activity in Halema‘uma‘u Crater. Geologists say there is no clear end in sight for the current phase of the eruption.

“Volcanic gases and ash are generally being transported downwind, but it is difficult to accurately predict ambient air concentrations anywhere on Hawai’i Island, which vary considerably depending on wind direction, topography and other factors,” said Health Director Dr. Bruce Anderson. “We can’t do much about the volcano, but we can collect information on air quality at more sites around Hawai’i Island. We need to provide up-to-date and accurate information to residents so they can make decisions to protect their health.”

The Hawai‘i Department of Health (DOH) is ramping up its air quality monitoring efforts to ensure emergency responders, residents, and visitors have accurate and up-to-date information on particulate and sulfur dioxide levels. The goal is to make data available over the months and years to come as the island adjusts to the long-term geologic changes brought by the East Rift Zone eruptions. DOH is investing more than $1 million to install 10 new long-term stationary air quality monitoring stations at strategic locations across Hawai‘i Island, as well as mobile laboratories, to create a robust data gathering system.

The state is applying for federal funds to help cover the costs of the new equipment and installation of the new air quality monitoring stations.  Gov. David Ige’s second supplemental proclamation signed on June 5, extended the disaster relief period in response to the ongoing Kilauea eruption through Aug. 4. This grants DOH authority to access special funding to at least partially cover the cost of response activities.

“The additional monitors are part of our three-phase plan to greatly enhance our air quality monitoring capabilities,” said Anderson. “The investment will allow us to have the resources we need to support response efforts and to provide information to residents on air quality now and into the future.”

Currently, the DOH has five long-term stationary monitors located in Hilo, Kailua-Kona, Mountain View, Ocean View, and Pahala. A sixth station, located in Leilani Estates, is presumed to be covered in lava.

To assist Hawai‘i’s air monitoring efforts, organizations such as the South Coast Air Quality Management – the air pollution control agency for all of Orange County and urban portions of Los Angeles, Riverside, and San Bernardino counties – have generously loaned Hawai‘i some of their air monitoring equipment. The equipment on loan will be replaced as new equipment is received.

DOH is simultaneously moving forward with phase three, which includes the placement of 10 new long-term air quality monitoring stations to supplement the five existing stations on the Island of Hawai‘i. The Department of Health, with input from the public, has already identified 10 locations for these permanent monitors.

Over the past month, new air quality monitors have already been set up at Pahoa High & Intermediate School in Pahoa, Kamehameha Schools in Kea‘au, Kealakehe High School, and in Na‘alehu, and are currently collecting air quality data. The other six potential locations include Captain Cook, Holualoa, Honoka‘a, Waikoloa, Waikoloa Village, and Waimea.

In addition to providing real-time air quality data, the Department of Health has also begun to look at ways to more accurately predict air quality conditions to better serve Hawai‘i Island residents. The health department’s Clean Air Branch is now evaluating forecasting models and tools that can be incorporated into its air quality monitoring program.