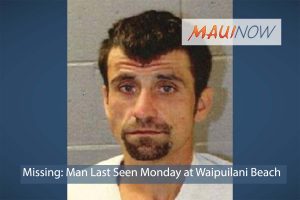 The Maui Police Department is seeking the public’s help in locating Zachary Dehart who was reported missing since 6 p.m. Monday July 9, 2018.

Crime Stoppers reports that he was in an argument at Kalama Beach Park before he went missing.  Authorities say he has not been seen since and is homeless.

Dehart is described as standing 6 feet tall, weighing 150 pounds. He has brown hair and brown eyes.

Anyone with information regarding the whereabouts of Zachary Dehart is asked to contact Detective Dawn Danley at 875-5412.