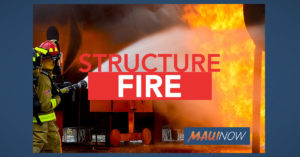 At approximately 2:10 a.m. this morning, Maui firefighters responded to reports of a fire within a unit at the Sunset Terrace Apartments. Engine 11 (Napili), Engine 3 and Ladder 3 (Lahaina), as well as a Battalion Chief responded.

On scene, firefighters discovered that an earlier arriving MPD officer was able to force the door to the apartment and rescue a 40 year old male resident who was disoriented and somewhat overwhelmed by the heat and heavy smoke conditions.

That resident was initially treated by MFD personnel and shortly after transferred to a Medic unit for further evaluation.

He was reported to be in stable condition.

Firefighters were able to quickly control the fire and assure there were no other occupants.

There were no other injuries to report, and at this time, a damage estimate and determination of cause are still being investigated.