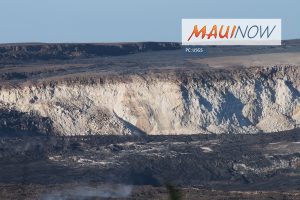 The Hawaiian Volcano Observatory reports that an explosive collapse event at Kīlauea summit occurred at 6:41 a.m. on Tuesday, July 24, 2018.

There was no tsunami generated from the seismic event that released energy equivalent to a 5.5 earthquake, according to the Pacific Tsunami Warning Center.

An overflight of the ocean entry area on Monday showed lava flowing approximately a quarter mile from Isaac Hale and Pohoiki Boat Ramp, and slowly closing in on the popular recreation spot.

The USGS reports that since May 3, 2018, Kīlauea Volcano’s lower East Rift Zone eruption has destroyed more than 700 structures, covered more than 32 sq km (12.4 sq mi) of land with black lava, and added more than 700 acres of new land to the island. Lava continued to enter the sea near Ahalanui during HVO’s early morning helicopter overflight of Kīlauea’s lower East Rift Zone (view to northeast) on Monday morning. The southern margin of the flow was still about 500 m (0.3 mi) from the boat ramp at Isaac Hale Park on Monday. The jetty along the launch ramp is visible near the center of the photo. (PC: USGS/7.23.18) The fissure 8 channel continues to carry lava toward the coast on the west side of Kapoho Crater (vegetated cone, far left). Northwest of this cone, overflows (lower left) of the channel occurred overnight, but lava was confined to the existing flow field and did not threaten any homes or structures. PC: USGS July 23, 2018