A tour bus overturns on Hāna highway, a different highway sees some changes, and a whale shark finds freedom off Lāna‘i. Get a quick recap on these stories and more with Maui Now's Kiaora Bohlool.

On Sunday, July 29th, a tour bus overturned on Hāna Highway around 2:15 p.m. The Temptation Tour bus was transporting eight passengers near mile marker 28 when the driver pulled to the right on the narrow road to allow another vehicle to pass. Soft dirt on the shoulder caused the Tour bus to slide over the edge and completely off the roadway. The bus overturned and came to a rest on its side. Medics arrived and transported three of the nine occupants to the hospital with injuries.  Hāna Highway was closed for about 30 minutes.

Changes are coming to a notorious intersection on Pi‘ilani Highway, following a deadly motor vehicle accident on July 20th that we told you about last week.   Crews will restripe to permanently remove the left turn lane from East Welakahao Road to northbound Piʻilani Highway.  Hawaiʻi Department of Transportation says the goal is to  improve safety and minimize vehicular conflicts.  The new traffic configuration is happening fast, and all the work should be completed by the afternoon of Friday August 3rd.

On Hawaii Island, a collapse event at Kīlauea summit was reported at 8 a.m. on Tuesday, July 31st.  There was no tsunami generated from the seismic event, which apparently released energy equivalent to a 5.4 earthquake.  The U.S. Geological Survey reports that the eruption has covered more than 13 square miles and created more than 800 acres of new land since early May.

A young whale shark that was entangled with heavy rope in recent weeks has been freed. On Sunday July 29th, a group of free divers located the whale shark off Kaunolū, Lānaʻi and after five dives were able to successfully help cut the line using a dive knife.  In video you can see in the article, the whale shark was in around 30 to 40 feet water but appeared very calm during the process. The rope was estimated to weigh 150 to 200 pounds. Whale sharks are listed as endangered worldwide, with an estimated decline of more than 50% since 1975 and are at risk to threats like entanglement.  After this whale shark was freed, went into deeper water and swam off. 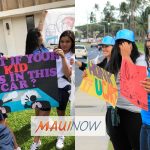 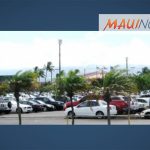