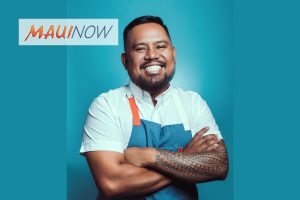 Bravo network Top Chef alum Sheldon Simeon is readying the launch of his second Maui restaurant Lineage, slated to open in early fall, according to information compiled by the Hawaiʻi tourism officials.

Lineage will be Simeon’s first full-service restaurant and feature dishes inspired by his own family recipes from the Philippines as well as recipes that are part of traditional Hawaiian cuisine.

Almost half of Lineage’s 80 seats will be situated on an outdoor patio. The interior will feature tropic-inspired green tones and light wood.

The new restaurant is under construction at The Shops at Wailea and there is an on-site job fair happening today until 3 p.m. next to Island Gourmet Markets.

Simeon currently operates the Tin Roof lunch counter in Kahului and had a two-and-a-half year run with his Migrant Maui restaurant at the Wailea Marriott before its lease expired in 2016.