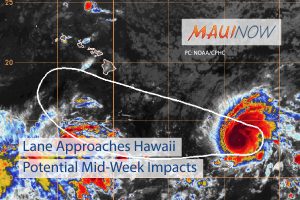 Forecasters with the Central Pacific Hurricane Center say, “Lane is forecast to pass south of the main Hawaiian Islands Wednesday and Thursday, potentially causing local impacts as it tracks west-northwestward.”  The agency says interests in these islands should watch the progress of Lane closely, “since long-range track and intensity forecast errors can be large.”

According to the CPHC, Lane is moving toward the west near 14 mph, a motion that is expected to continue from tonight through Monday night, but with a slightly slower forward speed.

At 5 p.m., Lane remained a Category 3 Hurricane with maximum sustained winds are near 120 mph. Forecasters say some weakening forecast through tomorrow night, but Lane will likely remain a powerful hurricane through Monday night, according to the CPHC.

The latest long-range forecast has Lane passing roughly 230 miles to the SW of South Point on Hawaiʻi Island Wednesday into Thursday as a weakening Category 1 Hurricane with 90 mph winds.

“Lane’s satellite presentation has not changed much since late this morning. The main features include a murky cloud-filled eye surrounded by a symmetric convective ring,” according to the latest CPHC forecast.

SURF IMPACTS: A large swell generated by Lane is expected to reach the southeast and east facing shores of the Big Island, and possibly east facing shores of Maui, overnight, according to the CPHC. Forecasters say this swell may produce large and dangerous surf along these shorelines starting early Monday.