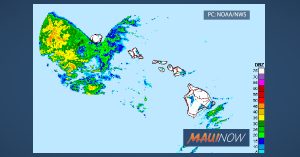 The watch was issued by the National Weather Service due to conditions that may develop that could lead to flash flooding.

According to the NWS, deep tropical moisture along with a strong upper level trough is expected to produce heavy rainfall and possible flash flooding. NWS forecasters say the flood threat for Maui County will be greatest on Monday and Tuesday night.

“Heavy rainfall could result in low spots in roads becoming dangerous and impassible due to severe runoff. Debris in streams and gulches could clog bridges and culverts resulting in dangerous flooding. Isolated landslides could also occur,” the NWS reports.

Campers and hikers are advised to reschedule their outing to a time when weather is expected to be more favorable.

The NWS reminds the public that it does not have to be raining heavily where you are for flash flooding to occur.