The Hawai‘i Department of Health Clean Air Branch has issued Notices and Finding of Violation and Orders against seven companies across the state, including one on Maui. All those responsible have either paid the fines or had the option to request a hearing to contest their alleged violations and penalties.

Hawaiian Electric Company, Inc. was cited for allegedly exceeding the visible emission limits on their boilers at the Waiau generating station in Pearl City and the Kahe station in Nānākuli, both are located on O‘ahu. The alleged violations were determined during a routine review of their records. Hawaiian Electric was fined $45,300.

T.J. Gomes Trucking Company, Inc. in Wailuku on Maui was cited for alleged operational and notification violations. The alleged violations were determined from a review of their records and the company was fined $10,600.

Ala Imua, LLC. in Kapolei on O‘ahu was cited for alleged operational and notification violations. The alleged violations were determined from an inspection of their facility and the company was fined $9,500.

AES Hawaiʻi, Inc. in Kapolei on Oʻahu was cited for allegedly exceeding their three-hour average hydrogen chloride permit limit for Boiler B. The alleged violation was determined from a review of their records and the company was fined $9,400.

Ludwig Construction, Inc. in Keaʻau on Hawaiʻi Island allegedly did not conduct annual performance tests for 2015 and 2016 on their mobile crushing plant. The DOH reports that the company was also late in submitting their permit renewal application and semi-annual monitoring reports. Ludwig Construction was fined $8,600.

Esaki Surveying and Mapping, Inc. in Lihu‘e on Kaua‘i was cited for not submitting their annual fee and semi-annual monitoring reports. The alleged violations were determined from a review of their records and the company was fined $6,000.

The NOVOs are listed online.

In general, fines are assessed to remove any economic benefit a company may have gained by not complying with their permit requirements. All fines are paid into a revolving fund that helps prevent or minimize damage to the environment.

The DOH Clean Air Branch is tasked with protecting the people and environment of Hawai‘i by monitoring air quality and regulating businesses that release pollutants into the air.

Through the air permit process, the DOH works to ensure companies comply with state and federal emission standards to minimize air pollution impacts on the public. 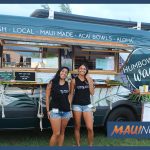 Made in Maui County Festival Off to Solid Start 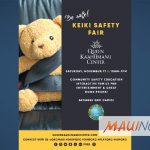