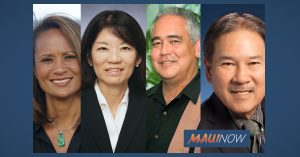 Governor David Ige has appointed a new chairperson of the Board of Agriculture and a new director at the Department of Business, Economic Development and Tourism. Denise Albano has been appointed chairperson of the Hawai‘i Board of Agriculture, and Phyllis Shimabukuro-Geiser has been reappointed deputy to the chairperson.

Albano has served as the Department of Agriculture’s water director since 2016, creating and improving water systems across state water agencies, using a collaborative approach to water usage in Hawai‘i.

Albano was president and co-founder of Feed the Hunger Foundation in San Francisco, California, where she created, developed and oversaw a public foundation that provides loans and grants to organizations internationally as well as domestically – in California and Hawai‘i.

“Denise has extensive executive management experience in both government and nonprofits. Her expertise in strategic growth and leadership, program development and collaborative partnerships, will serve the Department of Agriculture well,” said Gov. Ige.

“I’m very excited by this opportunity to join the dedicated employees of the Department of Agriculture to support their efforts and the desire of the governor and his administration to continue to vitalize an industry that is so important to the community of Hawai‘i,” Albano said. Gov. Ige also reappointed Phyllis Shimabukuro-Geiser as deputy to the chairperson, a position she has held since 2015.

Shimabukuro-Geiser is a long-time agriculture advocate who was previously employed at Mikilua Poultry Farm, Inc. in Waianae, having served as vice president and administrative and fiscal assistant. She was also vice president at Associated Producers Corp. in Honolulu.

“It has been an honor and privilege to serve in Gov. Ige’s administration these past four years. I thank him for this opportunity to continue serving our hard-working farmers, ranchers and nursery growers who are so committed to the success of agriculture in Hawaiʻi,” said Shimabukuro-Geiser. “This department is focused on achieving an innovative, sustainable economy for our state. Mike’s vision and past experiences make him the ideal person to lead this department and create economic opportunities for the future,” said Gov. Ige.

“As the world and global economy change, Hawaiʻi has to find its way to the future so the next generation can also choose to call Hawaiʻi home. That’s the work of this department. It’s an honor to be in this position,” said McCartney.

All three of these appointments are subject to senate confirmation. Gov. Ige also announced the reappointment of Ford Fuchigami to the position of Administrative Director in the Office of the Governor, a position he’s held since Nov. 2017.

Previously, he served as director, Department of Transportation. While at the DOT, he focused on maximizing existing infrastructure while prioritizing sustainability and making the state more energy efficient. He previously served as an executive in the hospitality industry.

“Ford has been a key member of my leadership team, and I value his ability to work with diverse stakeholders and manage multiple priorities. Together, we will continue to make significant progress on my administration’s initiatives,” said Gov. Ige.

“I look forward to continuing my work with Gov. Ige, the executive branch departments and agencies, and the many other partners who are working together to enhance efficiencies throughout our state,” said Fuchigami.

Fuchigami’s appointment is not subject to Senate confirmation.