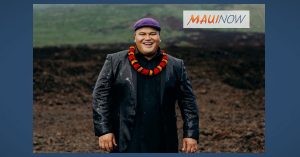 “No ‘Ane‘i” is the title of Kalani Pe‘a’s sophomore album, which translates to “We belong here.” Photo By: Antonio Agosto courtesy Maui Arts & Cultural Center

Kalani Peʻa will be a presenter at the 2019 GRAMMY Awards Premiere Ceremony. Peʻa was the 2017 GRAMMY award winner for his debut album “E Walea.”

The Premiere Ceremony precedes the 61st Annual GRAMMY Awards telecast and will be streamed live internationally via GRAMMY.com [1].

The Panaʻewa native and current Maui resident is also a nominee for a 2019 GRAMMY Award for his sophomore album “No ʻAneʻi,” which released in August.

In addition to Nā Hoa and Peʻa, other nominees in the category include: Kreole Rock And Soul, Sean Ardoin; Spyboy, Cha Wa; and Mewasinsational – Cree Round Dance Songs, Young Spirit.

Peʻa has upcoming tour dates [3] on the mainland for his “Music for the Soul Tour,” including: Feb. 2, Flagstaff, Arizona; Feb. 6, Phoenix, Arizona; and Feb. 8, Irvine, California.