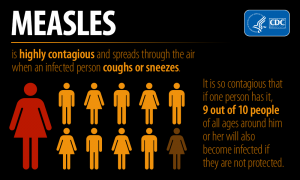 On Thursday, the Centers for Disease Control and Prevention issued a statement confirming a total of 695 cases of measles in 22 states. The CDC says this is the greatest number of cases reported in the United States since measles was eliminated from this country in 2000. According to the CDC, the high number of measles [1] cases in 2019 is primarily the result of a few large outbreaks – one in Washington State and two large outbreaks in New York that started in late 2018.

The LA County Department of Public Health is coordinating efforts with UCLA and California State University Los Angeles (Cal State LA), in an attempt to limit the spread of measles.  This includes education and outreach, immunization recommendations and quarantine orders.

UCLA Chancellor Gene Block issued a statement on Wednesday, April 24, saying the Los Angeles County Department of Public Health had notified the university that one of its students had contracted the measles.  The student had attended classes at Franz Hall and Boelter Hall on April 2, 4 and 9, while contagious, and did not enter any other buildings while on campus.

As of this morning, only one student remained quarantined on campus according to a Twitter update issued by the UCLA Newsroom.

Upon learning of the incident, Block said UCLA immediately identified and notified more than 500 students, faculty and staff with whom the student may have come into contact or who may have otherwise been exposed. “They were also provided with detailed information about treatment and prevention. Most of those individuals have since been cleared, but we are still awaiting medical records from 119 students and eight faculty members to determine whether they are immune to the measles,” Block wrote in a message to the UCLA community.

As a result, LACDPH decided to quarantine those individuals until their immunity was determined.

Meantime, at Cal State LA, administrators were working with health experts regarding a measles exposure that may have occurred in the Library North with potential exposure taking place on April 11, 2019 between 11 a.m. and 3 p.m.

Employees, including student workers who were at the location on the specified date and time, were sent home under quarantine orders and told to stay home and avoid contact with others as much as possible.

In a Health Watch update issued by Cal State LA on Thursday afternoon, administrators explained, “When Public Health identifies a person who has been exposed to measles and does not have written verification of two vaccination doses, they will be subject to quarantine of up to 21 days from the date of exposure. This will be enforced by a Health Officer Order for quarantine. A blood test may be done to check for immunity and possible removal of the order for quarantine.”

According to Public Health officials, measles is highly contagious. “It can stay in the air for up to two hours after a sick person coughs or sneezes and can also stay on surfaces for many hours. About 90% of people who are exposed and not immune to measles become ill 7-21 days after exposure,” health officials said in a news release.