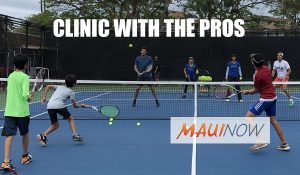 The Hawaii Champions Cup kicked off today, Saturday, May 4, 2019, with the spirit of giving back.

The two-day weekend event hosted at the Royal Lahaina Tennis Ranch features four of the most renowned tennis players in the world, all of whom have made it to a Grand Slam quarterfinal or beyond.

On Saturday afternoon, tennis legends Michael Chang, Tommy Haas, Mardy Fish and Mark Philippousis invited 25 Maui kids to join them on the court for a Q&A session, followed by a tennis clinic. When asked how he persevered through cramps at the 1989 French Open to win the championship title, Chang responded, “If you break it down and say ‘all I can play is the point in front of me. Once I am done with that, I will play the next point.’ You’d be surprised how much further you could go.”

Kaitlyn Ralar, 17, from Kamehameha School Maui, was one of the young players who shared the court with the legends. She left the event feeling motivated to never give up.

“The pros inspired me to keep going even when I am feeling down and taught me that really good things can come from it,” Ralar said. The Hawaii Champions Cup marks the second straight year that Hawai‘i has hosted an event on the North American tennis circuit for champion tennis players over the age of 30. Last year, Mauna Lani Bay on the Kohala Coast hosted the event, which was won by Haas, who defeated John McEnroe in the final.

The exhibition tournament starts Sunday, May 5, with two one-set semifinal matches and a championship match between the winners. Doors will open at 1 pm.

For more information and to purchase tickets, go to www.InvescoSeries.com [1].