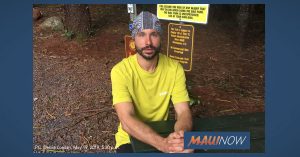 In a brief interview in the Makawao Forest Reserve on Monday evening, Benjamin Konkol, the boyfriend of missing Maui woman Amanda Eller took a few moments to thank the community for their help and to ask for prayers. Eller has now been missing [1] since May 8, 2019.

There were no prepared questions, just a blank slate for Konkol to express his thoughts. In this less-than-one-minute exchange with Maui Now’s Debra Lordan, Konkol said the following:

“Hello Maui community, this is Benjamin. I’m in the case for finding Amanda. I just wanted to reach out and say thank you for all of the love and support you’ve shared with me—with us—thus far. It really means a lot that I’m not alone out here searching. I can look around and see all of these beautiful faces and get energy out there caring for some I care about very much. So with that said, I’d just like to say, please, you know, continue to show your support if you’d like to, if you have any time, would like to donate—we’re still looking. We’re going to continue to look. I feel like she’s out here somewhere, and so I’m just asking for that love and support; and just keep her—keep us—in your prayers. Thank you.”

Volunteers say Konkol has been out searching every day since the search started. “He’s been out there—first guy out there, one of the last guys back, putting tons of energy into looking around out there, absolutely,” said Chris Berquist [2], a volunteer team leader in the search for Eller, during an interview on Thursday, May 16, 2019, at the Makawao Forest Reserve.

“He’s been following kind of just feelings and working his way down in the directions that he feels like she would have gone based on what he’s feeling inside and just what he knows about her as a person—just trying to figure out where she would have wanted to go. And so we’re letting him pursue whatever avenue he would like to and we’re just making sure that we’re all on a team,” said Berquist.

Maui police say surveillance shows the 35-year-old physical therapist and yoga instructor mailing a package [5] at the Haʻikū Post Office [5] on the day she went missing at approximately 10:19 a.m.

At approximately 12:12 p.m. on Wednesday, May 8, 2019, police say Amanda’s Toyota Rav4, license plate number LEZ110 was observed within the gravel parking lot near the “Hunter’s Trail” at the Makawao Forest Reserve by off duty Maui Fire Department personnel, who had gone for a hike.

On Thursday, May 9, 2019 at about 7:21 a.m., the Maui Police Department was contacted by Konkol, who is Eller’s live-in boyfriend.  Police say Konkol reported Eller missing and described several possible locations that Amanda liked to frequent, including the Makawao Forest Reserve.

During a press conference on Thursday, May 16, 2019, Maui police said Konkol was cleared as a Person of Interest at this time through investigation and voluntarily took a Polygraph Examination, which he passed.

The Maui Police Department is asking ANYONE who was at the Makawao Forest Reserve on Wednesday, May 8, to contact police.

“It was reported that an early 2000 model, medium-blue Dodge Ram full-sized pickup truck, which appeared to be a work truck, was observed parked next to Amanda’s vehicle within the Hunter’s Gate parking lot on May 8 at around 12:12 p.m. It was also reported that a white Toyota van operated by an older male with two dogs was in the area just prior to the time that Amanda’s vehicle was observed. Also, a couple in their 30s to 40s, who appeared to be tourists, were observed hiking in the area.”

Police are looking to identify and contact these people for any information they may have.

The Maui Police Department [6] has set up a direct number to police for the public to call with any and all tips and information about this investigation. The telephone hotline is (808) 244-6421, or tips may also be emailed to police at [email protected] [7].