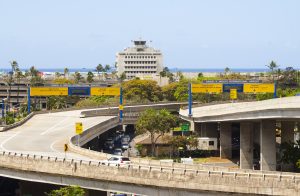 The state Department of Transportation Airports Division reports that all power and functions are restored in Terminal 1 at the Daniel K. Inouye International Airport in Honolulu. There will be some impacts to flights as normal operations resume. Passengers are encouraged to check flight status with their airline.

Power is being restored to Terminal 1 at the Daniel K. Inouye Intl Airport. All functions are expected to be restored momentarily.  Passengers on Maui that were delayed as a result are reporting a resumption in service.

Those traveling to or from the Honolulu International Airport are advised of a power outage at the Daniel K Inouye International Airport Terminal 1 (formerly Interisland Terminal) in Honolulu. The Department of Transportation Airports Division is currently working with HECO to restore power. Passengers should check with their airline on flight status prior to leaving for the airport.