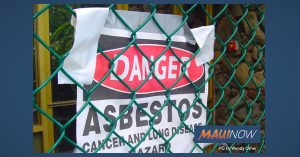 Sign at the Old Wailuku Post Office, which has since been demolished. File photo by Wendy Osher.

The attorneys general had previously petitioned the EPA to create a new rule requiring data collection on the importation and use of asbestos, calling it “one of the world’s most toxic substances.”

“The Environmental Protection Agency wrongfully denied our petition for rules that would have required more and better data about asbestos,” said Attorney General Connors.  “The agency’s denial makes it harder to protect our residents from the harms and costs associated with asbestos exposure.”

In April 2019 EPA issued a final rule that the agency says strengthens its ability to “rigorously review an expansive list of asbestos products that are no longer on the market before they could be sold again in the United States. This action gives EPA the authority to prohibit the use of these products or put in place restrictions to protect public health.”

According to information compiled by the Attorney General, Asbestos is a carcinogen that backers of their efforts say is “linked to diseases that are life-threatening, or cause substantial pain and suffering, including mesothelioma, fibrosis, lung cancer, gastrointestinal cancer, and other lung disorders and diseases.

“There is no safe level of exposure to this highly toxic material. Currently, the EPA does not possess, and is not collecting, the necessary comprehensive data about the importation, processing, and use of asbestos and asbestos-containing articles in the US,” according to information compiled in a press release.

In January 2019, the coalition petitioned the EPA pursuant to the Toxic Substances Control Act to create a new set of regulations within the TSCA’s Chemical Data Reporting rule. This rule is intended to provide data on the importation and use of chemicals, including asbestos. The Attorneys General point out that robust reporting of the distribution and use of asbestos and asbestos-containing articles is necessary to provide the EPA with the data it needs to fulfill its obligations to evaluate and address the risks posed by toxic chemicals under TSCA. Further, the new rule would have helped ensure that EPA’s regulatory decisions regarding asbestos are consistent with the best available science, and the data resulting from the requested regulations would provide the states with important information that is not currently collected.

The EPA denied the states’ petition in late April. In their lawsuit challenging EPA’s denial of the petition, the coalition argues that the rulemaking they requested is necessary under TSCA, and that the denial of the petition was arbitrary and capricious, and violates the agency’s obligations under TSCA. Specifically, the Attorneys General ask the court to compel EPA Administrator Andrew Wheeler to initiate rulemaking and issue a new asbestos reporting rule to:

The coalition is made up of the attorneys general of California, Connecticut, District of Columbia, Hawaii, Maine, Maryland, Massachusetts, Minnesota, New Jersey, Oregon, and Washington.