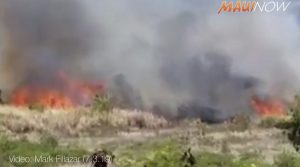 A brush fire burned an estimated five acres in a field behind Walmart in Kahului before being brought under control at 4:45 p.m. on Wednesday.

The fire was first reported at 1:17 p.m. on July 3, 2019 in a field located near the Hāna Highway and Airport Access Road.

Maui Acting Battalion Chief, Jeffrey T. Giesea said passing motorists called 9-1-1 to report smoke and flames observed along with people “running out of the bushes” where the fire was seen.

Firefighters utilized hose lines off of multiple apparatus to attack the fire from the ground; and bucket drops from the fire department’s Air 1 helicopter.

As of 5:16 p.m., fire crews remained on scene where they were conducting “mop up” operations and extinguishing hot spots within the fire’s perimeter.

The cause of the fire is under “active investigation” by Maui police.

Fire officials say their department did not order any evacuations or road closures, however, it is believed that the rear parking lot of Walmart was cleared and the store was reportedly not allowing people in for a temporary period.

Acting BC Giesea said crews battled the blaze in conditions that included temperatures as high as 90 degrees, NE winds of about 20 mph and relative humidity of around 50%.

Units responding to the scene included an engine, three tankers, a brush vehicle, Hazmat and Rescue companies, as well as the department’s Air-1 helicopter and a Battalion Chief. An engine was also dispatched from Wailea to cover emergencies in Kahului while crews from the area worked to battle the blaze.

Maui Now has reports of a brush fire near Walmart in Kahului. Heavy smoke is reported in the area off of the Airport Access Road near Pakaula Street. The fire was first reported at around 1:30 p.m. on Wednesday, July 3, 2019.

Fire crews are on scene with air support from the department’s Air-1 helicopter.

***Check back for updates, which will be posted as they become available. Mahalo to all who have been sending us images and video from the scene. If you have video or photos of news happening in Maui County, send it to us at [email protected]