Emergency Declarations Issued from Both Sides at Maunakea

In a 12 minute retort to Governor David Ige’s Emergency Proclamation at Maunakea, leaders with the TMT opposition offered a proclamation of their own.

Emergency Proclamations Called on Both Sides

Kanuha, who is among the protesters who have been on the front lines of the demonstration at Maunakea, issued a call to those who share his views saying, “Kanaka of Hawaiʻi–if we want to stop this, if we want to beat this settler-state system that’s forcing itself upon us, we need to rise up. We need to stand together. Stand together in aloha. If we do not respond, if we do not take a stand, our mountain will be destroyed again; our waters will be gone; our culture, our people, our future for our keiki…”

Opponents of the Thirty Meter Telescope project have staged a demonstration at the base of Maunakea Access Road where construction was set to start this week after 10 years of legal battles over rights to proceed.

On Wednesday, which was Day 3 of the protest, tensions rose as crowds swelled to 1,000 according to state estimates, roads were closed, and 33 citations were issued.  Many of those who were arrested were prominent Native Hawaiian elders. All have been ordered to appear in Hilo District Court on Sept. 20 at 8:30 a.m.

“We are in an emergency state–and if we do not react as such, we risk loosing it all.  And so we’ve come to a point in time where we must stand, we must fight, we must answer the prayers that our kūpuna have put out into the lani (heavens), into the honua (earth)–everywhere–for hundreds of years,” said Kanuha.

He continued saying, “Our kūpuna have prayed for the time when our people will stand again, where our people will come together, where Hawaiʻi and Maui and Molokaʻi and Lānaʻi and Oʻahu and Kauaʻi, and even Niʻihau, and who knows maybe we still get some buggas occupying Kahoʻolawe too, and bring them all together.  And we will beat this.  We will stop this desecration.  We will once again take our place as the people of this land and gain control of our future.  So the time is now.  There’s no better time to resist, to stand up and kūʻē (to resist), to kūpaʻa (be steadfast),” said Kanuha. 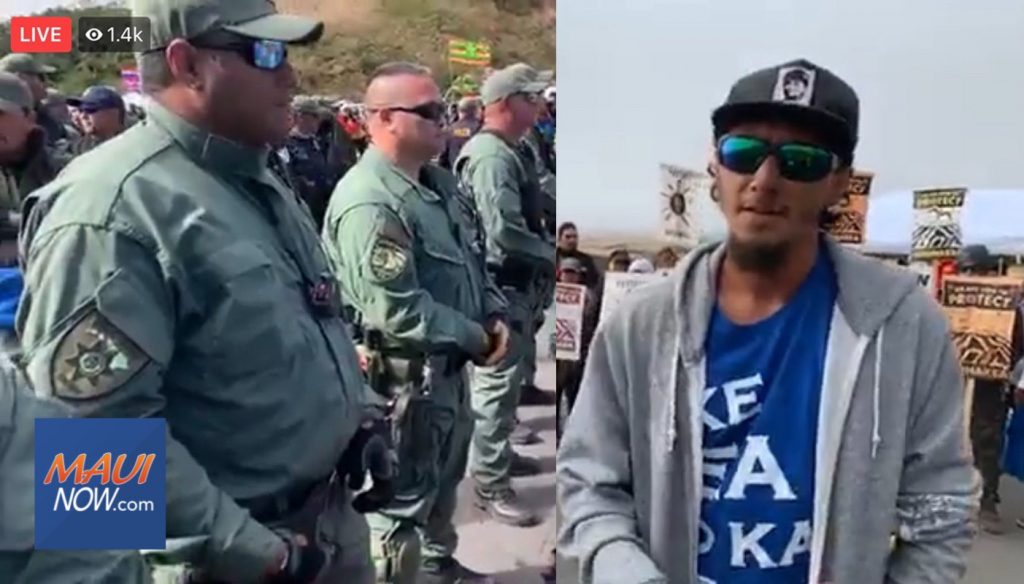 Safety Identified as a Top Priority

The governor’s emergency proclamation gives law enforcement increased flexibility and authority to close more areas and restrict access on Maunakea. State officials say this will allow law enforcement to improve its management of the site and surrounding areas and ensure public safety.

“Our top priority is the safety and security of our communities and the TMT construction teams. This is a long-term process and we are committed to enforcing the law and seeing this project through,” said Ige.

During an afternoon press conference on Wednesday, Gov. Ige said, “Since Monday, protesters have illegally occupied roads and highways. We are committed to keep a safe situation.  Law enforcement has been extraordinarily patient and respectful towards protesters; however, even though law enforcement has done everything it can to talk and reason with protesters, the protesters continue to break the law and place the safety of the public at risk.”

Gov. Ige continued saying, “The number of protesters has swelled and their blockage or roads and highways creates a dangerous situation.  This effects the ability of first responders to address emergencies, disrupts the public’s ability to move freely and safely.  The protesters’ activities affects our local businesses, their ability to use Saddle Road and operate. The conduct of the protesters also diverts our law enforcement resources from protection of the broader community.  They are endangering both the health of themselves as well as law enforcement and ultimately the citizens of Hawaiʻi County,” said Gov. Ige.

Kanuha responded to the governor’s assertions saying, “How could a highway that has been blocked on both ends by law enforcement, be blocked in the middle?  We were not obstructing any traffic because there was no traffic,” said Kanuha.

According to Kanuha, vehicles that were attempting to get to Maunakea from the Hilo side were blocked from proceeding since 6 a.m. on Wednesday.  “Once police retreated and opened up those roads, people who had been in those lines all day finally made their way to Maunakea,” said Kanuha.

“So while the governor wants to say that the highway was blocked by protectors, I’m not exactly sure how you block something that’s already blocked. We were stuck inside.  Those cars were there.  When asked to be moved, they were moved,” said Kanuha.

Kanuha said the police response could possibly be the largest mass law enforcement mobilization ever in the state of Hawaiʻi.  “And they’re utilizing the funds of the people–our monies to protect the rights of foreign investors and foreign corporations over the rights of the people of this place,” said Kanuha who argues that those funds could be used for natural disasters.

Kanuha called the governor’s declaration “irresponsible,” and asked “How do you justify this type of money, this type of budgeting, this type of mobilization of law enforcement when the people of Hawaiʻi have made it extremely clear… that we are not going to allow the desecration of our mauna.”

Gov. Ige said, “We do believe that this emergency proclamation gives law enforcement the additional tools that they need to continue to work to keep the people safe.”

He continued saying, “Certainly we continue to enforce the laws and ensure that all of those in our community have the opportunity to exercise their legal rights.  The Thirty Meter Telescope did receive all of the permits it is required to attain in order to be constructed and we are certainly committed to ensuring that the project has access to the construction site.”

The governor further explained, “We have been aware that many are passionate about this issue.  We were committed to keeping everyone safe, but we were committed to being respectful; and so we have tried to balance accommodations of people who were wanting to exercise cultural practices and we’ve been patient in trying to allow the protesters to express their feelings about the project.  We are taking steps to assure the rights of those in the project to get the project moving.”

“Is it right to bring in hundreds of officers… to remove the people of this land so that foreigners can come and further desecrate our mauna and further abuse the resources of our land,” said Kanuha.