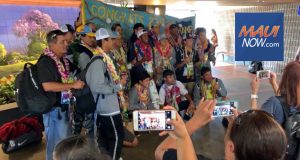 Kanoa Leahey spoke with Maui’s newest World Championship baseball team as they were greeted with leis, balloons and banners welcoming them home.

The Maui team claimed the title in Easley, S.C., going undefeated this summer, and 11-0 on the continent. They out scored their opponents in the World Series portion of the tournament by a dominating run total of 58 to 5.

For the fourth straight year, Central East Maui sent a team to the Senior Little League World Series, this time coming home with the hardware.

“We just came out offensively firing and that just pushed our defense to do really well,” said Ben Zeigler-Namoa who pitched in the U.S. title game Saturday morning.

“I mean, we did it for Maui and it feels great,” said Zeigler-Namoa. “I think it just—for the underclassmen that are on this team, it puts them in an uncomfortable situation where there’s pressure and you just have to show up and succeed,” he said.

“I think watching that last out was just the best moment of my life, baseball wise. Running out on that field with water balls and just throwing water everywhere,” said Zeigler-Namoa.

“It’s unbelievable, just the support from everybody here. I had a feeling that we’d have a bunch (of people) here. We had back in 2016, and it’s just an unbelievable feeling… I’m so happy for the kids,” said Head Coach Craig Okita.

“We’ve been fortunate over the last few years. I’m hoping the pony will win today because they’re in the championship game… it just goes to show that we’re dedicated to the sport here on Maui and we’ve been very fortunate. The kids put in a lot of work, the parents put in a lot of effort to get the kids to practice and get them to be where they are today. It speaks volumes,” said Okita.

“I’ve never been a part of a team that hit the ball so well for so long,” said Okita.

“It’s a fairytale type of deal. I would never imagine it to be that way, but I’m grateful for it,” said Okita.