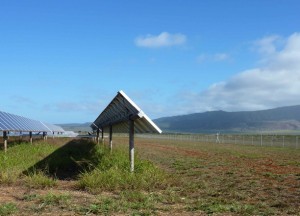 Maui Electric Company’s plans for renewable energy on Moloka‘i and Lāna‘i are pending approval by the Public Utilities Commission. If approved by the PUC, the first projects could come online as early as 2022.

According to Maui Electric, approvals are anticipated later this year with renewable energy procurements to be open to bids from developers locally and globally.

The plans for Maui Electric Company’s renewable energy push for Moloka‘i [1] and Lāna‘i [2] are available for viewing online.

Estimated targets of the new renewable generation for Moloka‘i are the equivalent of approximately 4 megawatts (MW) of solar or 3.6 MW of small wind, specified as turbines 100 kilowatts or less, and paired with energy storage. A portion of the Maui Electric-owned Moloka‘i property at Pala‘au is also being offered to proposers as a potential development site.

Development of the plans involved participation from the Moloka‘i and Lāna‘i communities. This included community meetings where the company explained the request for proposal process and provided opportunities for residents to submit written comments and concerns for developers to be aware of when preparing their proposals.

Feedback received from Moloka‘i and Lāna‘i residents from additional past community outreach efforts have also been incorporated in the plans, such as limiting the type of renewable energy technologies being sought in the respective procurement efforts.

“We put together competitive bidding plans where we proactively asked for community feedback on reaching a clean energy future for their islands,” said Sharon Suzuki, president of Maui Electric. “Working together with our communities is critical to the success of bringing stabilized, lower cost renewable energy to all of our customers and reducing our state’s overall imported fossil fuel dependency.”

The procurement efforts for Moloka‘i and Lāna‘i are part of the Hawaiian Electric Companies largest-ever renewable energy push for Maui County, O‘ahu and Hawai‘i Island.