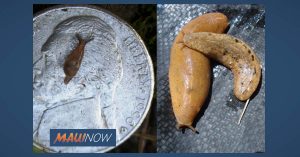 A case of rat lungworm disease was confirmed in an adult visitor to Hawai‘i Island, bringing the total amount of confirmed cases of angiostrongyliasis in Hawai‘i to seven so far this year.

This includes three residents and four visitors all of which likely contracted the disease on Hawai‘i Island.

The state Department of Health was notified of the case from the  Centers for Disease Control and Prevention, which conducted laboratory tests and made the confirmation.

The latest case involves an adult resident of the US mainland who was traveling in West Hawai‘i when they were infected with the parasite causing rat lungworm disease. The individual became ill in late June and did not seek medical care until the end of July after reoccurring dizziness. They were hospitalized on the mainland for a short time for their symptoms.

The investigation was not able to identify an exact source of infection. However, the individual reported eating a lot of fresh, local produce without washing first. They also grew a number of herbs on their lānai during their visit.

“Thoroughly inspecting and rinsing all fresh fruits and vegetables under clean, running water can go a long way in making our food safer to eat, and it is the most effective way to remove pests and other contaminants,” said Dr. Sarah Park, state epidemiologist. “When in doubt, cooking food by boiling for 3 to 5 minutes or heating to an internal temperature of 165 degrees Fahrenheit for at least 15 seconds can kill the parasite that causes rat lungworm disease.”

Angiostrongyliasis, commonly known as rat lungworm disease, is caused by a parasitic roundworm and can have debilitating effects on an infected person’s brain and spinal cord. In Hawai‘i, most people become ill by accidentally ingesting a snail or slug infected with the parasite Angiostrongylus cantonensis (A. cantonensis).

Symptoms vary widely between cases, and the most common ones include severe headaches and neck stiffness. The most serious cases experience neurological problems, severe pain and long-term disability.