The first witnesses took the stand in the murder trial for Kumulipo Sylva on Tuesday.

Witness Kyle Keoho said, “He comes in with a machete and then he starts like threatening us in like some weird mafia… (saying) ‘You guys are aliens. I’ve been sending them to the moon,’ or ‘You guys are the demons. I send them to the moon.’ Then he yells out his name and chops him in his neck,” according to Keoho who witnessed his friend fall to the ground.

“He said, ‘Believe it or not it was a demon.’ then he storms out,” according to Keoho. “I go over there to make sure that he’s gone, cause I’m scared too. And then I called 911 and I told them somebody killed my friend.”

When prosecutor Carson Tani asked Keoho to specify who swung the machete, Sylva could be seen looking up and raising his index finger on his left hand; then pinching his temple and stroking his nose as the witness is asked a follow up question to specify who was struck with the machete.

Witness Kyle Keoho said the confrontation started on a bus ride from the Hannibal Tavares Community Center in Pukalani and escalated upon arrival at the Queen Kaʻahumanu Center.

“So what had happened was, we got on the bus and then this guy he was like looking at Alex mean.  So Alex was like, ‘ah, this guy is a pussy.'”

During the bus ride, Keoho said his friend Cerezo was threatening to beat up Sylva. When they got off the bus at the QKC in Kahului, Keoho said, Sylva and Cerezo were “standing there staring at each other.”

“Alex is like ‘Nah, let’s go. I don’t want to fight. I’m on probation,'” according to Keoho’s account.

Keoho further testified saying Sylva went to the parking structure and came “storming back,” telling Cerezo, “‘I’m angry at you… rah, rah, rah,'” then, “He like points at everybody and is like, ‘yeah, (expletive) all you guys.'” and then “storms off” again.

Keoho said he went with Cerezo to the CVS pharmacy to buy alcohol, “some hard liquor and some juice.” Keoho then went with Cerezo up the escalator into the bathroom. “We were taking shots of alcohol,” said Keoho. After about five minutes or less, Keoho said he and Cerezo went back downstairs to look at shoes in Champs.

“We leave and he (Cerezo) asks me if that’s the guy…,” said Keoho, who could not confirm because of his poor eyesight.

Keoho and Cerezo then returned to the men’s bathroom outside of Macy’s on the second floor of the shopping center, where they began drinking again, according to Keoho’s testimony.

“We were taking shots, talking, and then I seen him (Sylva)… I see him coming like through from where I’m standing I see him walking up, and I’m like ‘Oh Alex, he’s going to fight you,’ or something, ‘You better be ready.'”

After the slaying, Sylva reportedly fled to the Kahului Community Center Park.

Prosecutors say Sylva hid the machete under some dirt and grass next to the tennis courts at the Kahului Community Center Park.

“The defendant then flees the tennis courts into the park. The defendant is located at the park by the police and is arrested. And ladies and gentlemen, based on the evidence presented in this case, we’re going to ask you to find this defendant guilty of murder in the second degree,” said Tani.

Prosecutors called the killing a “brutal slaying,” while defense attorneys say Sylva suffers from a serious mental disorder and was unable to appreciate what he had done.

Defense attorney Ben Lowenthal said, “Kumulipo Sylva walks into the bathroom at the mall. He does not see a human being. He does not see Alex Cerezo as a person. He sees a demon–a creature from hell crawling out of the ground. You see, Mr. Sylva has a schizoaffective disorder, dilusions–and he has been suffering from them for months until this point.”

“He has repeatedly told the police and others that this was a demon. That the other humans in the bathroom didn’t see it. But what he saw, what his brain was telling him was that this was no human, but something else. And he repeatedly told the police what his mission was. You see, the delusion that Mr. Sylva was suffering was that his mission was to send demons to the moon,” said Lowenthal in the opening statement for the defense.

“Mr. Sylva repeatedly said on the bus, ‘Go back to the moon, demon,'” according to the defenses’ opening statement.

“We will show you this awful homicide is not a murder,” said Lowenthal, noting that the defense will present what happened with Sylva and why his brain works differently. “He is indeed delusional… because out of these medical records, we can piece together a timeline. We can piece together that in the months leading up to this awful killing, he was repeatedly non-compliant with anti-psychotic medication. That he would continually return back to the hospital, seeking refills, sometimes within a 24-hour cycle. And the hospital got to know him.”

Lowenthal noted that his client is homeless saying, “His family turned him away because he could not live with his brother. You will meet his bother, who says back in November 2017, he was living on the property, coming by the property, but had to go because every night he would be yelling about demons coming out of the ground.”

There are a total of 24 potential witnesses and trial is expected to last at least two weeks.  Witness testimony continues today before Maui Judge Richard Bissen. 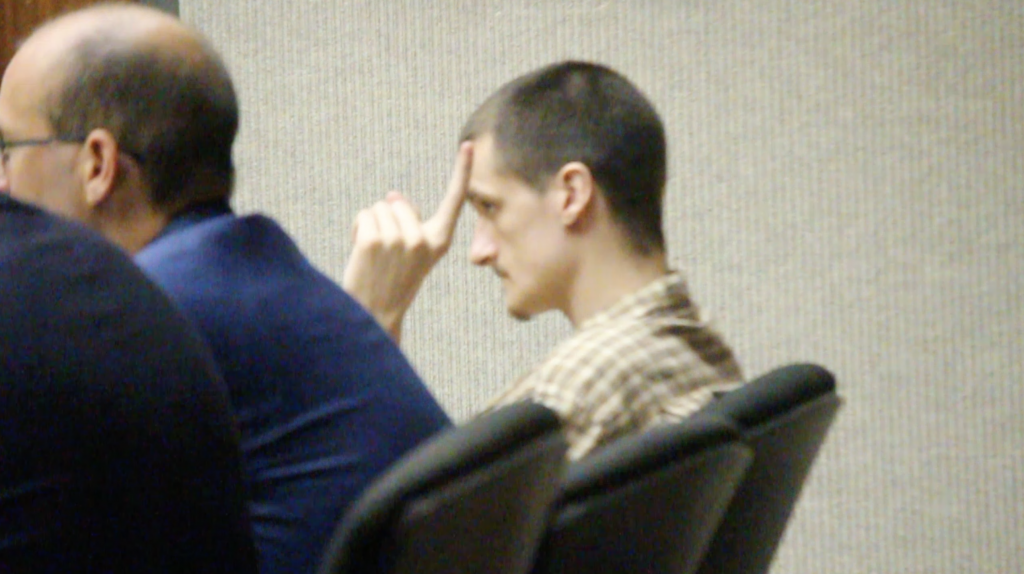 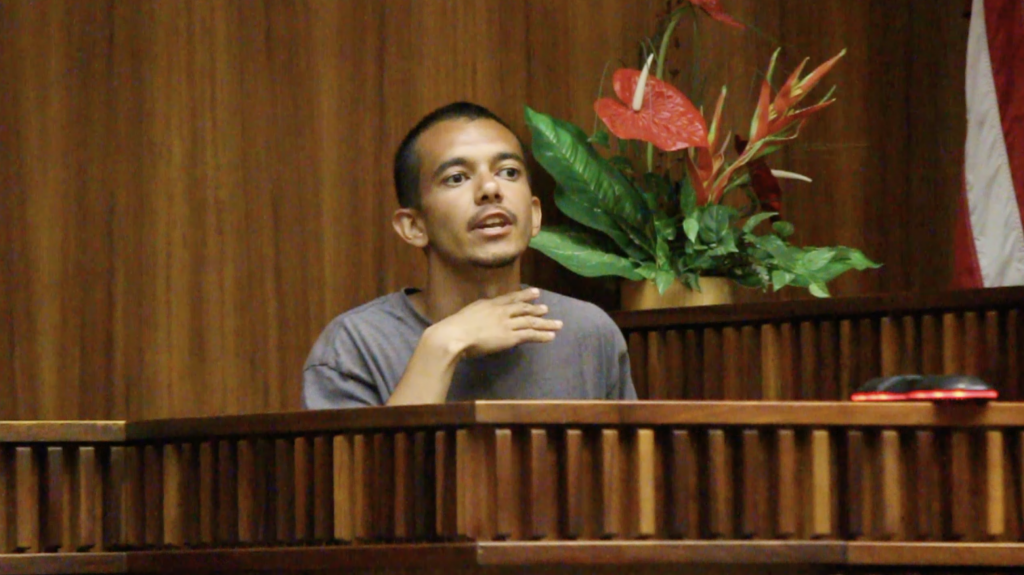 Witness Kyle Keoho moves his hand towards his neck demonstrating where the machete struck his friend in the slaying. Photo (10.15.19) by Wendy Osher. 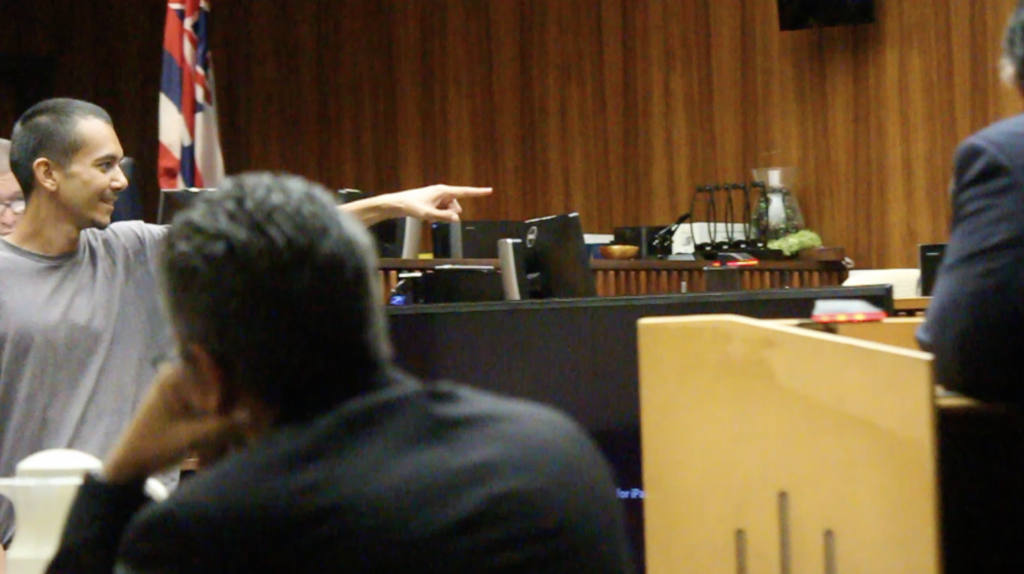 Witness Kyle Keoho points out suspect Kumulipo Sylva as the person who slashed his friend, Alex Cerezo, in a mall bathroom. Photo (10.15.19) by Wendy Osher. 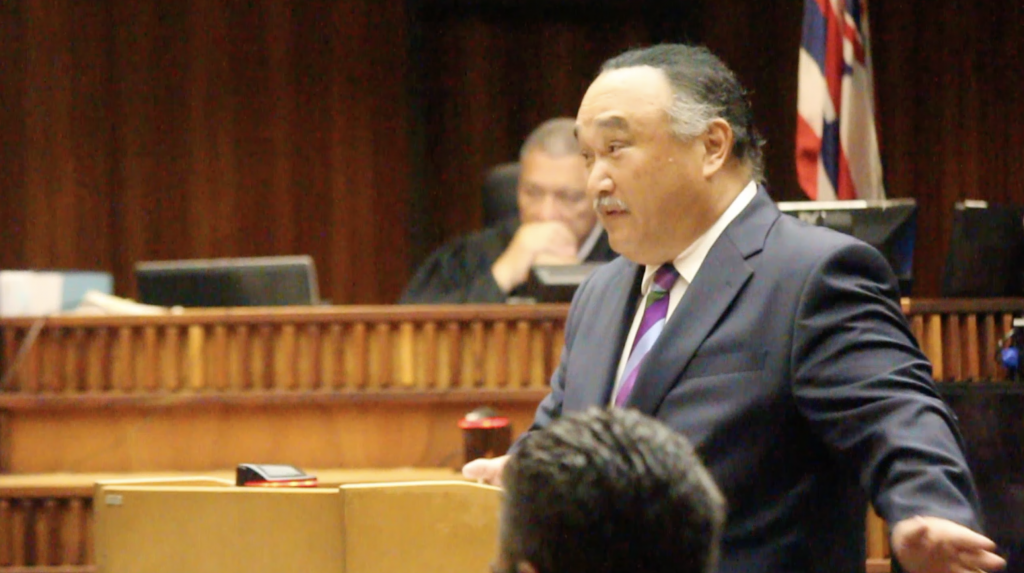 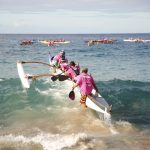 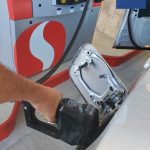