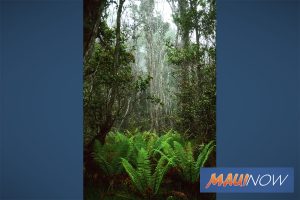 A $45,000 donation from the Max and Yetta Karasik Family Foundation is supporting the ongoing recovery of nature preserves in Kona Hema and Kaʻū on Hawaiʻi Island.

Both areas operate under The Nature Conservancy and provide fresh water for residents and vital habitats for native forest birds and other species.

Over the last 15 years, the Max and Yetta Karasik Family Foundation has gifted almost half a million dollars for the protection of 12,000 acres of native forest on the slopes of Mauna Loa.

Purchased in three parcels between 1999 to 2003, conservancy representatives say the preserve has been transformed from former pastureland to a thriving native forest.

Kona Hema is now contributing 14.5 million gallons of water a day to local aquifers, and scientists say the recharged will only increase with with continued investment. In addition, the ‘ōma‘o, a native thrush, recently established a small population in the preserve after having not been seen in south Kona for 40 years.

The 3,500-acre Kaʻū Preserve was established in 2002 after the Conservancy purchased former C. Brewer lands bordering the State’s Kaʻū Forest Reserve. Its wet koa-ʻōhiʻa forest shelters 153 plant species unique to Hawaiʻi and, in the absence of feral hoofed animals, one of the island’s richest assemblages of endangered forest birds.