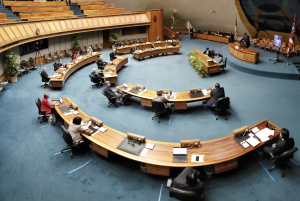 Members of the Senate and House of Representative sent a letter to Gov. David Ige and Public Safety Director Nolan Espinda, urging them to continue operation of correctional work furlough and halfway house programs for women inmates on O‘ahu, contracted through the YWCA of O‘ahu.

The letters state that the Department of Public Safety (PSD) notified the YWCA on May 29, 2020, that the work furlough program at the Women’s Community Correctional Center in Kailua, and halfway house program at the YWCA’s Fernhurst branch in Makiki, would both be terminated by June 30, 2020.

The legislators said that “the closure of (work furlough) program, operated solely by YWCA of O‘ahu since July 2015, means the only such resource available to women will no longer be available.

“According to the PSD’s annual report, it costs an average of $198 per day for the State to house an inmate. PSD paid YWCA of O‘ahu $120 per day for each resident in the program,” the letter goes on to say. “The imminent implementation of the decision to terminate the program presents immediate difficulties to put together a substitute program with the right staff, curriculum, and facilities.”

The legislators “strongly urge” immediate restoration of support by the PSD of the work furlough program and subsequently for the halfway house program.