Four members of the Maui Fire Department were promoted to Battalion Chief during a badge pinning ceremony Wednesday at the Kahului Fire Station. 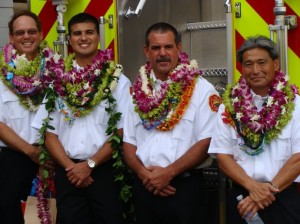 The expansion positions were among the administration’s goals set by Maui Fire Chief Jeff Murray, and part of the department’s strategic plan to better staff the stations and provide better communications during emergencies.

Prior to the BC approvals, the department was faced with one battalion chief overseeing all 14 stations covering Maui, Molokai and Lanai.  During emergencies, the BC is often called to the scene to assist with operations, leaving the department with reduced staffing in house to handle the county’s other district incidents.

The new staffing is expected to provide increased coverage for all the three fire watches.