Approximately 1,100 state employees are due to receive layoff notices that the state began issuing today.  The notices state the positions of the affected employees will be eliminated as of November 13, 2009. 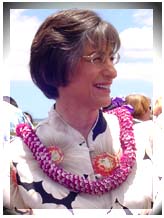 Some of the employees may have the ability to “bump” persons with less seniority, and so it is unknown at this time which of the notified individuals will actually lose their jobs and just how much money the state will save in the process.
Governor Lingle also announced that she has instructed her Cabinet today to begin the process of identifying other State employees who may be subject to a second round of layoffs that might be needed in order to realize additional savings.

The Governor today also announced that she will furlough approximately 900 non-union state employees for three days per month effective September 1, 2009.

These “exempt excluded” employees are all non-union employees, who were not necessarily covered by Judge Karl Sakamoto’s order barring the Governor from unilaterally implementing furloughs for union employees.  Lingle projects the furloughs will save the state between $7 million to $10 million for each twelve-month period the furloughs are in effect.  The Governor said she will also explore whether there are other employees, not covered by Judge Sakamoto’s order that can also be furloughed.

“It is unfortunate we must take these difficult steps today,” said Governor Lingle. “Furloughs have always been my first choice to achieve significant labor cost reductions needed to address the unprecedented budget shortfall the State is facing.”

Lingle said her administration has worked to reduce state spending by approximately $2 billion since the summer of 2008 without significantly reducing labor costs, except through attrition.

“The simple facts are that our actual tax revenues for the past fiscal year, combined with the Council on Revenues’ projections for the current fiscal year means the State is still facing a budget shortfall of $786 million through June 30, 2011.  Our current expenses continue to exceed our projected revenues and our labor costs equal approximately 70 percent of our general fund expenses.  Therefore, in order to balance the budget, as the State Constitution requires, we must significantly reduce our labor expenses.  I empathize with our employees and realize these layoffs will have a significant impact on the affected employees and their families.  I sincerely wish this situation could have been avoided,” said Lingle.

The State Council on Revenues is scheduled to meet on August 27 and again in January.  The governor said further cost cutting will be necessary if the projections show lower revenues for the state.