Felicia was downgraded from a Tropical Storm to a Tropical Depression early this morning.Â  The system is now centered just east of the Hawaiian Islands.Â Â  With the effects of Felicia diminishing considerably, the County of Maui expects to deactivate its Civil Defense emergency operations at 12 noon today. 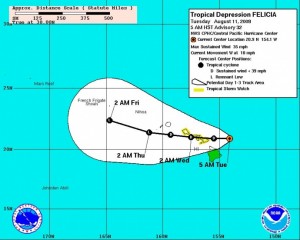 At 8:00 am HST, the center of tropical depression Felicia was located near latitude 20.8 north…longitude 154.3 west or about 140 miles east of Kahului, Hawaii and about 235 miles east of Honolulu, Hawaii.

The depression is moving toward the west near 10 mph, and this general motion is expected to continue for the next couple of days. The center of Felicia will pass from east to west over the Hawaiian Islands later today and Wednesday.Â  Rain and wind bands began sweeping across the county overnight and the center of the storm is expected to pass near Maui this (Tuesday) afternoon.

Maximum sustained winds are near 35 mph with higher gusts. Felicia is expected to weaken over the next 48 hours.

A large swell generated by Felicia will persist across the state through today and gradually decrease tonight Wednesday. Also, locally heavy rainfall and flash flooding remains a possibility.

Summary of 8:00 am HST information:

The next advisory will be issued by the central pacific hurricane center at 11:00 am HST.