Felicia has been downgraded to a remnant low pressure system, as it moves west over the island chain. Officials with the National Weather service say Felicia has lost all of the key characteristics of a Tropical Cyclone, having produced no deep convention since yesterday.Â  Forecasters say the system has become ill-defined as it runs up against the terrain of the Big Island and does not present enough of a threat to warrant extra precautionary measures that had been in place yesterday. 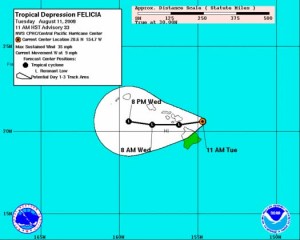 The system is now centered just east of the Hawaiian Islands or about 120 miles East of Kahului, Maui with sustained winds of 35 mph. But its loss of steam means the Central pacific Hurricane center will no longer be issuing advisories on this system.

The Red Cross closed its nine shelters across Maui County this morning.Â  Agency officials say only two people were accommodated overnight, but that staff was fully prepared to deal with an influx if they had to.Â  The County’s Emergency Operating Center in Wailuku was expected to deactivate its operations at noon today.Â  County officials say the effects have diminished considerably.