Members of the Hawaii Carpenters Union staged a small scale protest at two different sites on Maui today. Â Banners were placed in front of the old Pizza Hut and future Wallgreens site in Kahului, a separate site in Lahaina and four Wallgreens locations on Oahu. 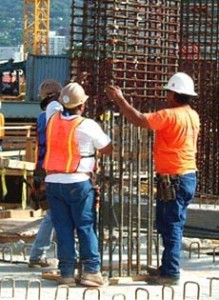 Hawaii Carpenters Union Assistant Business Rep. Lance Yoshimura said the “bannering” is being done as an awareness campaign to the pubic and the company advocating fair pay for carpenters.Â  Yoshimura says carpentry is a highly skilled, labor intensive and dangerous job that deserves the area standard wage which is agreed upon by local, state and federal agencies.Â  He claims at least one subcontractor is not paying that standard amount.

Local Wallgreens officials were not immediately available for response upon publication of this story.

The current Davis-Bacon wage for carpenters working in building construction on Maui is in the $36 range with fringes upwards of $19.

The Hawaii Carpenters Union is the largest construction union in the state, providing wages, benefits and services to some 7,200 members (an estimated 500-700 of which work in Maui County).