DROUGHT CONDITIONS ON MOLOKAI:Â  The island of Molokai has been having especially dry weather in recent months.Â  The latest update from the National Weather Service indicates severe drought on the western third of the island and moderate drought conditions covering the eastern two-thirds of the Friendly Isle.Â  The reservoir in West Molokai remains low and the mandatory cutback on irrigation water use had increased from 10 to 20 percent from the previous month.Â  The next drought update will be issued in two weeks. 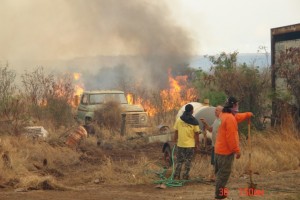 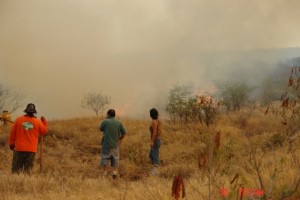 More than 50 firefighters from County and State agencies are on the scene of a 6,000 acre fire on Molokai tonight.Â  Fire personnel have been fighting shifting wind directions since the fire started.

The fire is currently moving in a westerly direction and residents of the Kalamaula area are being allowed to remain in their homes. Helicopters providing air water drops ceased operating at nightfall and are expected to return at daylight Monday morning when conditions are safe for flying.

Firefighters from Maui’s Wailuku, Makawao and Kihei fire stations were sent to Molokai this afternoon to assist crews battling a brush fire that started shortly after 12 noon on Saturday, August 29.

Homes in the Kalamaula Mauka area that were threatened late this afternoon were evacuated when the fire came dangerously close to their residences.

Since the fire began, a single home sustained damage to its garage and one firefighter was treated for smoke inhalation on Saturday.Â  The firefighter was reported to be in stable condition after being treated at Molokai General Hospital.

(Posted by Wendy Osher; information provided by the County of Maui)