Firefighters continue to maintain their hold on a fire that has burned between 7,800 and 8,000 acres since it started Saturday afternoon.Â  The blaze is now 50% contained overall, but the upper portion of the fire in the forestry area remains active, and is not considered under containment. 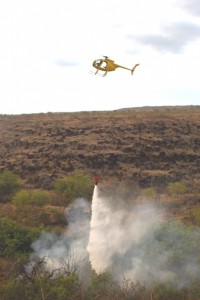 Deputy Chief Robert Shimada said firefighters dealt with some troublesome flare-ups toward the eastern flank of the fire earlier in the day.Â  Batallion Chief Val Martin said the challenge today is the weather which has not been working in the department’s favor.Â  He noted a drop in humidity to 40 percent and an anticipated increase in winds as well.

Department officials say the focus of today’s efforts has been to maintain a perimeter around the populated areas of Kalamaula, Kauanakakai and Kawela as they work toward their main priority of protecting life and property. Â Â There are still pockets of unburned brush in the Kawela Plantation, as well as in some abutting residential areas.

This morning, five helicopters were on scene to assist dozens of state and county crews from the Maui Department of Fire and Public Safety, the Department of Forestry and Wildlife, the National Park Service, and the Nature Conservancy.Â  On the ground, there are more than 62 firefighter personnel that are actively working the fire.Â  Two crews from Maui were rotated into the lines today to relieve fellow firefighters on the front lines.

Maui Civil Defense Administrator Gen Iinuma tells us firefighters have been active in maintaining a perimeter or buffer zone on the blaze with bulldozers to protect residents and businesses.Â  The department has also been using water drops in the upper forestry region to protect endangered species.Â  Iinuma said there are areas that are tactically back burned or intentionally left alone to manipulate the flames and control the blaze in the firefighters’ favor.

Fire officials say they do not expect the fire to increase significantly in size, but do expect to monitor areas for flare ups, and keep watch over locations that could smoulder for days or even weeks.