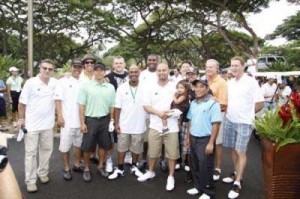 Last year, the Golf Classic hosted by the Flyin’ Hawaiian, raised $100,000 for the Alzheimer’s Association Aloha Chapter.Â  That’s more than 80% of the agency’s goal for the year.

“I look forward to returning to Hawaii each off-season to give back to the community that is so supportive of me,” said Victorino.Â  “I am honored to team with the Hawaii Children’s Cancer Foundation, an organization that provides great resources and amazing support to children and their families who face unbelievable challenges,” he added.

“The Hawaii Children’s Cancer Foundation is extremely grateful to be the beneficiary of the Second Annual Shane Victorino Celebrity Golf Classic & Auction to be held Saturday, November 21st at Maui’s Makena Beach & Golf Resort,” said Dale Saito, board president of the Hawaii Children’s Cancer Foundation.Â  “Shane Victorino’s exceptional accomplishments on and off the baseball field make him a hero and inspiration to all Hawaii — and especially to our kids who are battling cancer.”

A dinner, silent and live auction, as well as an awards ceremony will follow the tournament in the Ka’eo Ballroom at the resort.